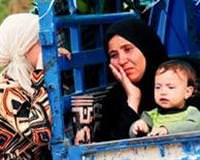 Dozens of frightened Syrians with mud covering their boots and clothes clambered to a Turkish village on Tuesday to find bread for families waiting across the border in Syria in sodden make-shift camps.

A night of torrential downpours worsened the plight of the thousands of Syrians sheltering in the hills within sight of the Turkish border, ready to join some 8,500 of their compatriots in Turkey if Syrian forces advance towards them.

"We are desperate here. We are under the rain, our children are sick. We have no medicine and no food," said a crying woman with a baby lying next to her.

In the Turkish border village of Guvecci, a group of dishevelled Syrian men waited by the school, many smoking in silence and in shock.

Alaa, a 30-year-old driver holding a bag of loaves, said he had fled the village of Dama, set in apple orchards 17 km (10 miles) west of Jisr al-Shughour, which Syrian President Bashar al-Assad's army retook on Sunday in his latest drive to crush protests demanding political change.

The Syrian army had not yet reached his village, but tales of the plight of Jisr al-Shughour were enough to make him leave.

"We can't afford to stay. The army is going into villages and the shabbiha are following the troops, stealing and killing, and sexually assaulting women. They are thugs and behave barbarically," he said.

Shabbiha are gunmen loyal to Assad.

Ibrahim, a migrant worker from a village outside Jisr al-Shughour said he had fled with his wife and seven children after hearing the army and shabbiha had reached nearby villages.

"The situation was already getting desperate ... the authorities had cut all basic services and fuel deliveries to us," he said.

Abu Ahmad, a 31-year-old farmer from Sarmaniya, had crossed to Guvecci to find food for 15 members of his family in Syria.

"The situation is getting worse. It rained heavily last night and we were drenched. We managed, but it was particularly difficult for the children and the elderly."

"The troops and army assembled last week in Jorin and made the school their headquarters," he said, referring to an Alawite village, where he said residents threw flowers at the army.

"They rampaged with the shabbiha ... They have no shame. The shelling killed three people in Sarmaniya who were not lucky enough to escape. My land has been burned, together with plots belonging to my cousins. The shelling and shooting was indiscriminate."

Some 8,500 Syrian refugees have fled Jisr al-Shughour and its environs, just 20 km from Guvecci. Turkey's Red Crescent has begun to build a fifth camp.

"We want to thank Turkey, Prime Minister Tayyip Erdogan is a good man," said a 21-year-old Syrian student who preferred not to give his name. He said he would head back into Syria later on Tuesday and was sure the protests would continue.

"We know what the regime is doing. Assad is a criminal. He kills people because they want freedom ... The army in Egypt and in Tunisia protected the people. But (in Syria) it kills them, they side with Assad and the regime. If soldiers refuse to use their guns against the people they are killed."