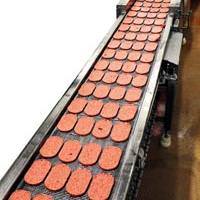 Eight children have been admitted to hospital in northern France after eating beef burgers infected with a strain of E.coli bacteria, health officials said on Thursday, fanning fears of a wider outbreak.

The officials said the bacteria was not related to the lethal strain of E.coli that has killed 39 people and made 3,000 ill, most of them in northern Germany.

"We are now certain that this is not the same strain as the one discovered in Germany," a health official from the Nord-Pas-de-Calais region said on i-Tele television.

Privately owned German discount chain Lidl has withdrawn boxes of frozen beef patties which regional health authorities said were behind the French infections. The boxes were sold under the brand "Steaks Country" and had expiry dates of May 10, 11 and 12, officials said.

On Wednesday five children, aged between 20 months and eight years and from different towns in the Nord Pas de Calais region, were taken to a hospital in the city of Lille after suffering bouts of bloody diarrhea.

One was quickly released, but four were still being treated at the hospital. Three are being treated with hemodialysis, a method of removing waste products from the blood in the case of kidney failure.

Three children were admitted to hospital on Thursday, the health official said.

One of the victims' condition was life-threatening, a medical source told Reuters.

Health Minister Xavier Bertrand said a search was under way to determine the origin of the outbreak and stricter controls would be enforced at production sites.

"I hope we can launch a search program very quickly, we are working on that already with French researchers in order to identify (the origin) and deal with health problems soon," he said on RTL radio.

A spokesman for Lidl said that beef used in the suspect boxes had been bought from French supplier SEB-CERF, based in the northeastern town of Saint-Dizier, which produces some 400 tonnes per week of frozen beef, according to its website.

"The products were made in France, but depending on the expiry date and our suppliers' opportunities, the beef can come from Germany, Italy, France, the Netherlands or even other places," spokesman Jerome Gresland at Lidl told Reuters.

"We buy the beef through this supplier with a stamp that says it comes from the European Union."

A box of suspected beef patties found at the home of an infected child was labeled as containing beef that came from Germany, the supplier's chief executive told Reuters.

But, he added, that container was not enough to determine the origin of the infection with any certainty because many other boxes of suspected product contained beef produced in other locations around Europe.

"There is about 10 tonnes worth of withdrawn product ... Some of it contains beef from Belgium, Italy, there is probably even some from France," said Guy Lamorlette, adding that he expected the result of analyses on the beef within 48 hours.

French health authorities ordered Lidl to withdraw "Steaks Country" boxes with a range of expiry dates after finding a box with a May 10 expiry date at the home of one of the infected children.

The firm withdrew the entire line of frozen beef patties.