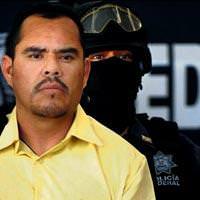 In a statement, the police said they had arrested 34-year-old Marco Guzman, alias "El Brad Pitt" or "El Dos" (Number 2), a leader of the cartel's armed wing, La Linea.

"It's a name given to the man by his associates. I guess they think he looks like him," a spokeswoman for federal police said, referring to the 47-year-old Hollywood star Pitt.

A police photo taken after the arrest showed Guzman to have black hair, receding slightly at the temples, dark eyes and a goatee beard. His nose appears to resemble Pitt's.

Formed by renegade police officers in the northern state of Chihuahua, La Linea act as enforcers for the Juarez cartel, a group based in the border city of Ciudad Juarez which controls some of the main drug trafficking routes to the United States.

Police arrested Guzman with two other suspected drug gang members in the state capital, the city of Chihuahua. He was wanted in connection with murders, kidnapping and attacks on police and had a 500,000 peso ($42,000) reward on his head.