Assad to address Syria as his troops block refugees 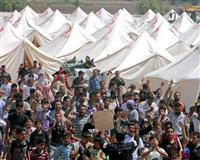 Syrian President Bashar al-Assad is to address the nation Monday as his forces sweep through the northwestern border region with Turkey blocking refugees fleeing a military crackdown on protests against his autocratic rule.

The operation along the border follows the biggest protests in four months of anti-Assad unrest Friday which a violent clampdown has failed to quash. Security forces shot dead up to 19 protesters Friday, rights groups said.

Assad's will address "current circumstances," the state news agency said, his first speech since April 16 and only his third since protests began in the southern Hauran Plain on March 18..

Syria's ambassador to Washington said in a newspaper interview his government differentiates between the legitimate demands of protesters and those of armed gangs and said Assad will deal with "all these issues in his speech."

More than 10,000 Syrian refugees have already crossed into Turkey and Turkish officials say another 10,000 are sheltering close to the border just inside Syria in the olive groves and rich farmland around the town of Jisr al-Shughour.

But Syrian human rights campaigner Ammar al-Qurabi said the army was now stopping those still inside Syria from leaving.

"The Syrian army has spread around the border area to prevent frightened residents from fleeing across the border to Turkey," he told Reuters. Qurabi also accused pro-government forces of attacking people trying to aid the refugees as they fled.

The violence so close to its border challenges Turkey's foreign policy of "zero problems with neighbors" that has seen it befriend the Middle East's autocratic rulers while presenting itself as a champion of democracy.

Turkish Prime Minister Recep Tayyip Erdogan Turkey has pledged to keep his borders open to refugees and has called the Syrian government crackdown "savagery," but beyond words, it is not clear whether Ankara's rapprochement with Damascus has earned Turkey any influence with Assad to halt the violence.

"There are roadblocks everywhere in Bdama to prevent people from fleeing but villagers are finding other routes through valleys to escape to the Turkish border," said Omar, a farmer from Bdama who managed to reach the border area.

"We received no bread today. There was one bakery operating in Bdama but it has been forced to shut. The 'shabbiha' (Assad's gunmen) are shooting randomly," one refugee, a carpenter who gave his name as Hammoud, told Reuters by telephone.

"One man in Bdama was injured today and we managed to smuggle him to hospital in Turkey. But many fear getting shot if they attempt to cross the border," the refugee added.

Faced with troops firing live ammunition, Syrian protesters have taken to venting their anger against Assad at night.

Demonstrations erupted overnight in the cities of Hama, Homs, Latakia, Deir al-Zor, the town of Madaya near the Lebanese border, several suburbs of the capital Damascus and in Albu Kamal on the border with Iraq, witnesses and activists said.

Authorities blame the violence on armed groups and Islamists, backed by foreign powers. Syria has barred most international journalists from entering the country, making it difficult to verify accounts from activists and officials.

Syrian rights groups say at least 1,300 civilians have been killed and 10,000 people detained since March.

The Syrian Observatory for human rights has said more than 300 soldiers and police have also been killed. Other rights campaigners said dozens of security personnel had been killed by loyalist troops for refusing to shoot at unarmed civilians.

In an interview published in the Financial Times Monday, Medvedev criticised the way Western countries had interpreted U.N. resolution 1973 on Libya which he said turned it into "a scrap of paper to cover up a pointless military operation."

"I would not like a Syrian resolution to be pulled off in a similar manner," he added.