Assad has less than week to heed reforms call 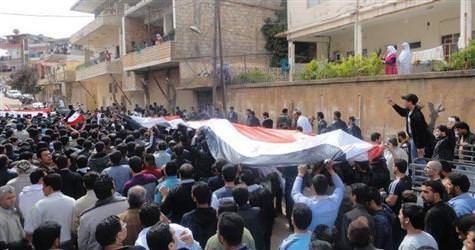 Turkey, Syria's biggest neighbor and main trading partner, has been trying to persuade Assad to halt a military crackdown on demonstrations that have killed more than 1,300 civilians and forced thousands to take refuge across the border.

Ersat Hurmuzlu, an advisor to Turkish President Abdullah Gul, told the Dubai-based al-Arabiya channel on Sunday night that Turkey will be watching closely what Assad tells his people in a planned speech on Monday.

"The demands in this field will be for a positive response to these issues within a short period that does not exceed a week," Hurmuzulu said.

"The opposite of this, it would not be possible to offer any cover for the leadership in Syria because there is the danger ...that we had always been afraid of, and that is foreign intervention."

Several European countries have submitted a draft resolution to the U.N. Security Council to condemn Syria's crackdown on protesters. Russian President Dmitry Medvedev has indicated he would not support such a resolution.

Syrian authorities blame the violence on armed groups and Islamists, backed by foreign powers. Syria has barred most international journalists from entering the country, making it difficult to verify accounts from activists and officials.

More than 10,000 Syrian refugees have already crossed into Turkey and Turkish officials say a further 10,000 are sheltering close to the border just inside Syria in the olive groves and rich farmland around the town of Jisr al-Shughour.