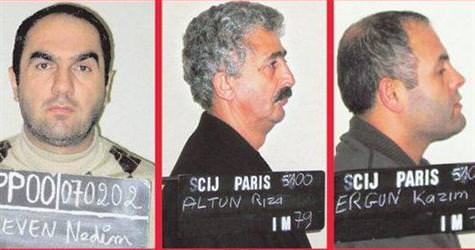 A case trying a number of the PKK terrorist organization’s prominent European leaders began yesterday in Paris. SABAH, which is on location and tracking the case, has acquired photographs of the perpetrators taken by French police.

A number of the PKK terrorist organization's leaders are being tried in the French capital for an operation which transpired in 2007, in a case which commenced yesterday. For the first time ever, SABAH is publishing photos taken by the French police of the likes of Ali Rıza Altun, Nedim Seven, Atilla Balıkçı, Hacı Karakoyun, Kazım Ergün and Cemal Bozkaya, all high-level PKK members. The full list of perpetrators detained and processed by French police are as follows: Ali Rıza Altun, Nedim Seven, Atilla Balıkçı, Hacı Karakoyun, Kazım Ergün, Kadri Özmen, Şükrü Kozludere, Renas Lelikan, Ayhan Tayfur, Burçin Uçar, Cemal Bozkaya, Mehmet Ulaş, Muhittin Aslan, Nihat Aslan and Canan Kurtyılmaz… Of those both Ali Rıza Altun and Canan Kurtyılmaz stand out as being former leaders of the PKK terrorist organization's Europe wing. Nedim Seven operated as the organization's treasury in Europe, while Atilla Balıkçı was in charge of the organization's illicit money traffic. Hacı Karakoyun would launder drug revenue. Kazım Ergün, a member of the organization's mountain wing, was not only the instigator of a number of murders, but was also Öcalan's brother-in-law... Cemal Aslan and Muhittin Aslan operated as couriers; while the others were connected to the organization through PKK affiliated cultural associations.

'THE INTELLIGENCE KNEW ABOUT US'
The trial, involving a total of 18 suspects began at Paris' County Court at 13:30 yesterday. Fourteen suspects, including Nedim Seven and Ayhan Tayfur, who are being detained at the La Sante Penitentiary, attended the trial's first hearing. Rıza Altun and Kazım Ergün, who are still at large, as well as two other suspects whom have not been detained were absent from the trial. The suspects provided statements in Turkish and not Kurdish and their words were translated into French. Another attention-drawing element of yesterday's hearing transpired when one of the suspects stated as a defense, "Up until 2007, we were informing the French Intelligence Unit DST of all of our activities and there were never any problems. However, suddenly in 2007 something changed unbeknownst to us and all of our activities began to be considered as crimes."
NUMBER ONE REASON IS DRUGS
One of the main reasons behind France initiating an investigation into the PKK's activities in 2007 was the effects of the drug trafficking controlled by the PKK negatively affecting French youth. The widespread indictment conducted by the French investigating judge Thierry Fragnoli, which resulted in the trial, qualifies the existence of the PKK in Europe as a huge strike. Case file: 33539017 includes the organization's drug trafficking and revenue from black money laundering as a result of political activities conducted by cultural associations as criminal activities that disrupt the peace; all elements that will be used against the organization.