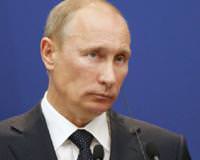 Prime Minister Vladimir Putin dismissed speculation of a rift with President Dmitry Medvedev on Tuesday, saying he and his protege shared a "joint programme" for Russia's development.

When asked about Medvedev's pledge to reduce the role of the state, reform the justice system and fight corruption, Putin said it was a "joint programme with President Medvedev".

"There are absolutely no differences between our positions," Putin said at a press conference in Paris.

"If you look at my public statements, in the recent past or even some years ago, you will see that all these ideas were already formulated. It is our joint programme," Putin said.

The 58-year-old prime minister dodged a question on whether he would run in the March 2012 presidential election, saying the Russian people will decide who becomes president.

Medvedev, the 45-year-old former lawyer who Putin steered into the Kremlin in 2008, has also refused to say whether he will run. He indicated in an interview published on Monday that the two men would not run against each other. [ID:nLDE75I0C8]

In a speech at the St Petersburg Economic Forum last week, Medvedev said that unless his modernisation plans were implemented, Russia faced another period of stagnation two decades after the 1991 fall of the Soviet Union. [ID:nLDE75H018]

For a menu of stories on Russia's election year[ID:nRUS2012]

For stories from the St Petersburg Forum [ID:nLDE75E1E4]

Medvedev's speech was interpreted by investors as an attempt to set out his credentials for a possible re-election bid and to differentiate himself from Putin, the head of the ruling party.

Medvedev called on the government to speed up privatisation to cut the role of the state in the economy and said state capitalism would lead Russia into a dead end. [ID:nLDE75G0JH]

When Putin was asked if he could imagine himself making such a speech, he said that Medvedev was right to have drawn attention to the problems, but added that it was wrong to "groundlessly defame" the judicial system.

"I have said many times, in different situations and in different audiences, that we are not going to build any state capitalism," said Putin, who as president from 2000 to 2008 created a host of powerful state corporations.

"This discussion heated up when we had created a number of state corporations," Putin said.

Opponents said some of the corporations became sprawling state conglomerates which stifled competition.

"The creation of state corporations is not intended to increase the share of state property. It is intended to pull together assets, consolidate them and raise their capitalisation and then take them to market," Putin said.