Savagery in a report 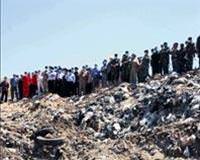 SABAH has acquired details of the report which resulted in Prime Minister Tayyip Erdoğan referring to the developments in Syria as ‘savagery’. On June 9th, Ankara obtained a report through an official channel, detailing the ongoings in Syria. The report presented to Erdoğan consists of information regarding developments depicted through both information and imagery according to districts.

RIDDLED WITH BULLETS
The report written to research the allegations of events transpiring in Syria contained interesting details. The report has resulted in the surfacing of allegations that the Syrian army riddled imprisoned Syrian opposition members with bullets. According to the report, the most harm is being suffered by women. The reports points to a number of cases of rape and murder. The information in the report appears to verify the information which has surfaced in the international press.

'BEARDED SOLDIERS'
The report draws attention to a number of cases where the military set fire to homes in some villages and towns. An interesting detail which has not yet surface in the press however was detailed in the report, states, "Allegations that the main water supply has been contaminated with poison in areas close to Turkey, along Syria's northern region are not unfounded." It was also stated in the report, that some of the dissidents killed had been skinned, and that a number of bearded soldiers that were not Syrian were also involved."