Over 1,500 Syrians refugees flee to Turkey 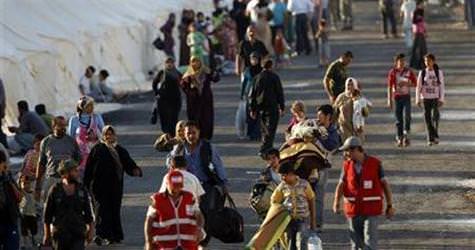 More than 1,500 Syrian refugees crossed to Turkey on Thursday as the Syrian army swept up to the border in its campaign to stamp out anti-government protests.

The provincial government in Hatay said on Friday morning that the total number of refugees registered at the temporary shelter camps had reached 11,739, compared with 10,224 a day earlier.

Most of Thursday's influx came from people who had set up makeshift camps just inside Syrian territory, who fled once the army appeared.

Reuters reporters in Guvecci, a Turkish village at the frontier, said the camps on the other side of the border fence appeared to be completely deserted on Friday morning, and they saw no more refugees crossing.

Syrian soldiers took positions close to the border on Thursday and armored personnel carriers patrolled the road crossing the hills.

But by Friday only a handful of troops were visible, some occupying a prominent building at the top of the hill overlooking the border, directly across from Guvecci, and three Syrian soldiers could also be seen at a sand-bagged machine gun post established on top of a house in the Syrian border village of Khirbat al-Joz.

Turkey and Syria have had close relations in recent years, having almost gone to war in the late 1990s because of Kurdish militants using Syria as a sanctuary.

But since pro-democracy demonstrations erupted in March in Syria, Turkey has become increasingly critical of the repressive measures used by Syrian President Bashar al-Assad's security forces.

Subsequently, the Foreign Ministry in Ankara summoned the Syrian ambassador, reflecting the growing disquiet in Turkey.

U.S. Secretary of State Hillary Clinton expressed concern on Thursday that the reported move by Syria to surround and target the town of Khirbat al-Joz, just 500 metres (yards) from the Turkish border, marked a worrying new phase of Syria's attempt to quash anti-government protests. She said it raised the "potential of border clashes."