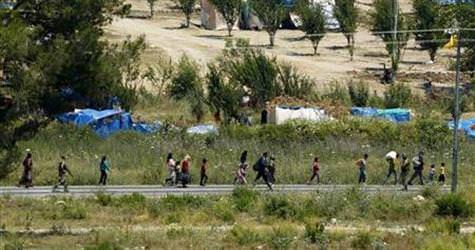 The United States is concerned by reports that Syria is massing troops near the border with Turkey, which could escalate the crisis in the region, and is discussing the issue with Turkish officials, Secretary of State Hillary Clinton said.

Syrian troops gathered near the Turkish border, witnesses said on Thursday, raising tensions with Ankara as President Bashar al-Assad increases the use of military force against a three-month-old popular revolt.
Turkey said the two countries' foreign ministers had consulted by telephone, and Syria's ambassador to Ankara was later summoned to the foreign ministry, demonstrating further how disturbed Turkey is over events in its southeast neighbor.
Clinton said the reported move by Syria to surround and target the town of Khirbat al-Joz just 500 meters (yards) from the Turkish border marked a worrying new phase of Syria's attempt to quash anti-government protests.
"If true, that aggressive action will only exacerbate the already unstable refugee situation in Syria," Clinton said.
"Unless the Syrian forces immediately end their attacks and their provocations that are not only now affecting their own citizens but (raising) the potential of border clashes, then we're going to see an escalation of conflict in the area."
Witnesses said hundreds of terrified refugees crossed into Turkey to escape an army assault. Syrian troops stormed the village of Managh, 15 km (9 miles) south of the border and just north of the commercial hub of Aleppo, according to residents.
"I was contacted by relatives from Managh. Armored personnel carriers are firing their machineguns randomly and people are fleeing the village in all directions," an Aleppo resident said.
Mainly Sunni Turkey has become increasingly critical of Assad, who belongs to Syria's Alawite minority, an offshoot of Islam, after previously backing him in his drive to seek peace with Israel and improve relations with the United States. Assad also opened the Syrian market to Turkish goods.
Clinton said she had discussed the situation with Turkish Foreign Minister Ahmet Davutoğlu and that President Barack Obama had also talked to Turkish Prime Minister Tayyip Erdoğan.
The United States has steadily sharpened the tone of its rhetoric toward Assad, saying he is losing credibility and must either implement promised reforms or get out of the way.
Rights groups say more than 1,300 civilians have been killed across Syria since mid-March, but the anti-Assad protests have still grown, especially on Fridays after Muslim prayers.
Syrian authorities blame Islamist militants and armed gangs for killing more than 200 police and security personnel.
A Turkish Red Crescent official told reporters about 600 Syrians had crossed the border on Thursday morning.
Abu Saeed, a 50-year-old man, told Reuters he fled on Thursday to Turkey with his two wives and three children after he saw some 50 military vehicles enter Khirbat al-Joz.
"(The vehicles) entered the village with a bulldozer and started demolishing our homes. A 90-year-old man was killed by them. They were army soldiers and police. Then we fled here."
It is hard to verify accounts of the violence as Syria has expelled many journalists, including Reuters correspondents.
GROWING PROTESTS IN THE NORTH
Reuters reporters in Turkey saw half a dozen Syrian soldiers enter a previously unoccupied building on a hill overlooking the border, opposite the Turkish village of Guvecci and hoist a Syrian flag where a Turkish flag had been.
They left shortly before noon. Within an hour four busloads of troops arrived, along with a pickup truck mounted with a machinegun.
Turkey's 2nd Army Commander visited the Guvecci border post to take stock of the new troop deployments.
"They (Syrian troops) have never been this close before," said Reuters Television journalist Omer Berberoglu. "But they didn't come down to where the refugees were."
Turkey's Foreign Ministry summoned Syria's ambassador for consultations, state-run Anatolian news agency reported.
Protests have grown in northern areas bordering Turkey following military assaults on towns and villages in the Jisr al-Shughour region of Idlib province to the west of Aleppo that had sent more than 10,000 people fleeing across Syria's 840-km (520-mile) border with Turkey.
Soldiers and secret police backed by armored vehicles set up road blocks on Wednesday along the main road from Aleppo to Turkey, a major route for container traffic from Europe to the Middle East.
They arrested dozens of people in the Heitan area north of Aleppo, residents said.
One resident, a physician, told Reuters by telephone: "The regime is trying to pre-empt unrest in Aleppo by cutting off logistics with Turkey."
Central neighborhoods of Aleppo, a largely Sunni city, have been mostly free of protests, in part due to a heavy security presence and a continuing alliance between Sunni business families and Syria's ruling Alawite hierarchy.
Syria, a mostly Sunni country of 20 million with Kurdish, Alawite and Christian minorities is vulnerable to sectarian tensions, especially as Assad increasingly relies on loyalist Alawite troops and irregular forces known as 'shabbiha'.
Many Sunnis resent the privileges gained by Alawites who have dominated the security apparatus during the 41 years of Assad family rule. Some dislike Assad's policy of aligning Syria further with Shi'ite Iran and Lebanon's Hezbollah guerrillas.
A senior Turkish official said on Sunday that Assad had less than a week to start implementing long-promised political reforms before foreign intervention began, without elaborating.