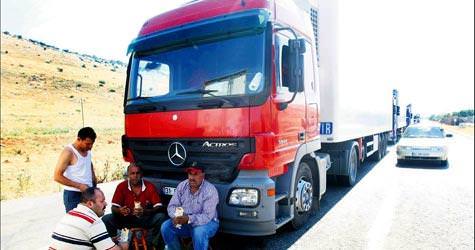 Ever since Syrian refugees have flocked into Turkey seeking shelter, Turkish freight trucks transporting cargo through Syria to the Middle East have been faced with difficulties.

Turkish truckers, whose routes pass through Syria, explain that ever since the uprisings transpired and Syrians began seeking refuge in Turkey, Syrian officials as well as the public themselves have taken on a negative stance towards Turks. The French News Agency (AFP) spoke with a number of Turkish truckers waiting to pass through the Syrian border, where they explained that the 'honeymoon' is over, and that everything has changed.
Mehmet Mercimek, a trucker transporting freight explains that when he runs out of gas, they tell him there isn't any left. "However, I know that they do have gas. A month ago, they would embrace us and now they see things differently." Another trucker transporting freight over Syria to Iraq, Hasan Çetin states; "People ask me why Turkey has embraced these traitors."
While trucker Hasan Kara expresses concern he may lose his job should things continue this way, another trucker named Nimet Maram states, "When they look at our documents they delay things. They send us left and right, whereas in the past we used to be given priority because we are Turks."
MILITARY POSITIONS ALONG THE BORDER
Meanwhile, most recently the Syrian military has positioned themselves near the Turkish border in the Naija village as well as in the Kiseyir village located along the border with Lebanon. The English Guardian Times however states that the military movement along the Turkish border has exasperated tension between the two countries and claims there is a guarded threat towards Turkey. The newspaper also mentioned that Iranian soldiers are supporting the Fourth Division, which is led by Assad's brother Maher Assad and is known for being ruthless.
NUMBER OF REFUGEES IN TURKEY REACHES 11,458
According to an announcement by the Prime Ministry Emergency and Natural Disasters Directive, the number of refugees that have come in to Turkey from Syria has reached 11,458. The announcement also states that the food aid for Syrian citizens located just beyond the border, which began on June 17th, 2011, is continuing. Meanwhile, as the influx of refugees continues, so does the return of Syrians and 730 Syrian nationals were stated to have returned to Jisr al- Sighur.