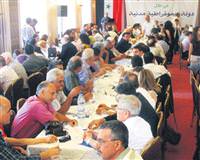 Syria said on Monday it will hold talks with the opposition on July 10 to set the framework for a national dialogue promised by President Bashar al-Assad, who is facing a three-month uprising for political freedoms.

The state news agency SANA said constitutional amendments, including changes to an article which puts the Baath Party at the centre of Syrian politics, would be on the agenda of the July 10 meeting.

Some of Syria's leading intellectuals called on Monday for sweeping political change that could end 41 years of Assad family rule, at a rare conference allowed by the authorities under pressure from a three-month uprising.

The government also announced that it would invite opposition figures to July 10 talks to set the framework for a dialogue promised by President Bashar al-Assad, and that constitutional changes would be on the agenda.

Facing the biggest threat to his autocratic rule since he succeeded his father 11 years ago, Assad has held out the prospect of political reforms while sending his troops to crush protests across the country.

Many opposition figures have rejected Assad's call for dialogue as insufficient and some activists refused to take part in Monday's conference, saying it could be exploited by authorities while mass killing and arrests continue.

Nevertheless, the conference included outspoken opponents of Assad, some of whom pulled no punches.

"The solution to this crisis has to address its root causes. This regime must be toppled and replaced with a democratic system," said leading Syrian writer Michel Kilo, who spent three years as a political prisoner.

A declaration issued at the end of the meeting at a Damascus hotel pledged to support the goal of a democratic state that guarantees freedom and rights to all members of society.

It called on the authorities to end military assaults on cities and towns, withdraw troops and security forces from the streets, release thousands of political prisoners held without trial and allow the rights of protest and assembly.

Rights groups say 1,300 civilians have been killed in demonstrations and 12,000 people have been arrested since the start of the uprising. Authorities say more than 250 soldiers and police have died in clashes provoked by militant groups.

The July 10 meeting will help launch a dialogue that Assad announced in a speech last week. The state news agency SANA said the agenda would include constitutional amendments, such as changes to an article which puts Assad's Baath Party at the center of Syrian politics.

"All the national political and intellectual figures and forces" would be invited to attend the meeting, called by a committee led by Vice President Farouq al-Shara, SANA said.

"The committee confirms that there is no alternative to a political (solution)...and to widely opening the door before all Syrian citizens to take part in building a democratic and pluralistic society," it said.

Many activists and opposition figures say they will not attend such a meeting because a national dialogue is not possible amid violence and a continued crackdown.

"The regime is putting forward the idea of dialogue to buy time and absorb popular rage... (It) will not find takers unless the military option ends, all political prisoners are released and the right of peaceful protest is acknowledged without restrictions," a statement by a coalition of centrist, leftist and Kurdish politicians said.

At Monday's conference, attended by 150 people, some speakers adopted a softer tone than those calling for Assad's removal but nonetheless said demands of street protesters must be met after decades of autocratic rule.

Writer Louay Hussein, another former political prisoner, said repression in the last four decades had undermined Syria. But he emphasized that peaceful means must be found to meet popular demands.

Monther Khaddam, an academic from the coastal city of Latakia, said a wider national dialogue was needed and that intellectuals were "behind street demands until the end."

In neighboring Iraq, more than 200 Syrian Kurdish refugees held a demonstration protesting against the Assad government's crackdown and calling for international intervention.

"We need the world to help us get our freedom. What we have suffered over the last 40 years by Assad's family and the Baath party is enough," activist Delan Akram said.