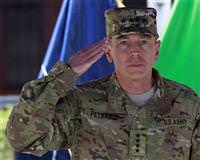 The U.S. Senate on Thursday voted overwhelmingly to confirm General David Petraeus, now commander of U.S. and NATO forces in Afghanistan, to be the new director of the Central Intelligence Agency.

The vote was 94-0, making Petraeus the second senior nominee for President Barack Obama's national security team to win Senate confirmation unopposed this month. The other was Leon Panetta, who is leaving the CIA director's job to become U.S. secretary of defense.

Petraeus is expected to complete his command in Kabul in July, then hang up his military uniform and start his new civilian job at the CIA in September. Until then, the CIA's deputy director Michael Morell will serve as acting director of the intelligence agency.

Petraeus, hailed for his role in the Iraq war, faces daunting challenges at the CIA: providing accurate intelligence on trends in Afghanistan; tracking and neutralizing militants on multiple continents; and monitoring issues from climate change to the political effects of global economic upheaval.

Before the vote, the 58-year-old Petraeus was lauded as "among the finest military officers and strategic thinkers of his generation," as Senate Intelligence Committee Chairwoman Dianne Feinstein, a Democrat, put it.

He is credited with salvaging the U.S. effort in Iraq, where he led the 2007 surge of U.S. forces, and improving the security situation in Afghanistan during the U.S. military surge there in the past year. Throughout his career of 37 years in the military, he also has earned a reputation for brains and political savvy.

The Senate on a voice vote also approved Ryan Crocker to be U.S. ambassador to Afghanistan. Crocker, a career diplomat, is a former ambassador to Iraq as well as Pakistan, Syria, Kuwait and Lebanon.

Petraeus was confirmed as CIA director one year to the day after he was confirmed by the Senate to become the commander of the troubled war in Afghanistan. Moving to Kabul last year required him to take a demotion from being head of U.S. Central Command overseeing a region that included Afghanistan, Iraq, Pakistan and Yemen, a job he had held since 2008.

Petraeus understood that the terrorist threat had changed, spreading to countries such as Yemen and Somalia, Republican Senator Lindsey Graham said before the vote.

"I don't believe any single person understands the threats America faces better than General Petraeus. And at the CIA he'll have a chance to take the fight to the enemy in a different way," Graham said.

Petraeus is expected to embrace the drone strike campaign in Pakistan, a nominally covert CIA operation that has fueled anti-American sentiment but successfully located and killed militants in safe havens.

He has sought to reassure senators who may have worried that his role in commanding the Afghan fight could conflict with the impartiality the CIA must bring to assessing progress -- or lack of it -- there.

Petraeus said he would be "keenly aware that I am the leader of an intelligence agency, and not a policy maker."

During his confirmation hearing this month, he also said that he had recommended a slower troop drawdown from Afghanistan than Obama had decided upon, but backed the decision and added that no military commander in history gets "all the forces he would like to have, for all the time."

A Republican favorite, Petraeus has often been mentioned as a possible future presidential candidate, but has said he has no interest in the job.