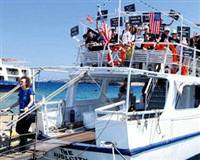 The flotilla of boats planning to challenge Israel's naval blockade of the Gaza Strip will set sail next week, a spokeswoman said on Friday, after repeated delays that activists blame on Israeli sabotage.

"Israel is doing its very, very best to make sure we don't get out of port," spokeswoman Greta Berlin said, speaking by telephone from Greece where some of the ships are moored.

"We want to move the boats by July 5 to get to our rendezvous point no later than July 6 or 7 ... We will go with what we have," she added.

The small flotilla, including boats from the United States, France and Canada, was due to leave at least a week ago, but the departure has been constantly put back amidst allegations of a dirty tricks campaign to stop the pro-Palestinian initiative.

Israel says its blockade of Gaza is aimed at stopping weapons from reaching the enclave's rulers, Hamas -- an Islamist group which is branded a terrorist organization by the West.

Palestinians and their supporters say the naval closure is illegal and constitutes collective punishment for Gaza's 1.5 million residents.

Irish activists accused Israel on Thursday of sabotaging their boat in Turkey by damaging the propeller shaft, stopping it from sailing to Gaza.

Berlin said the Greek authorities had not yet allowed a U.S. boat, "The Audacity of Hope", to leave the port of Piraeus. "The Greeks are cooperating with Israel as much as they can," she said, adding that nine boats were now hoping to take part in the mission, compared with original plans for up to 15 ships.

Israel has denounced the flotilla as a provocation, but has denied allegations it sabotaged both the Irish boat and a Swedish vessel, which also reported propeller damage after berthing in a Greek port earlier in the week.

The latest challenge to the blockade comes a little over a year after Israeli marines stormed another pro-Palestinian flotilla that had approached Gaza. Nine activists died in the on-board clashes, provoking an international outcry.

Israel has urged foreign governments not to let the second convoy get under way. In a speech on Thursday, Israeli Prime Minister Benjamin Netanyahu thanked allies, including Greece, for taking steps to block the activists.

"I want to thank many leaders in the world for speaking and acting recently against the provocative flotilla," he said. "Israel has the full right to act against the efforts to facilitate rockets-smuggling to Hamas's terror enclave".