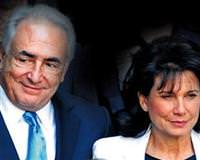 Former IMF chief Dominique Strauss-Kahn was released from house arrest on Friday after prosecutors said the hotel maid who accused him of attempted rape lied to a grand jury and made other false statements.

Strauss-Kahn, 62, still faces charges that he sexually assaulted the woman in New York but questions about her credibility appear to be shifting the case in his favor in a twist that could upend French politics.

He smiled as he left the courtroom with his wife, Anne Sinclair, at his side.

Until his May 14 arrest, Strauss-Kahn had been a steward of the global economy and a leading contender in the 2012 French presidential elections. Jubilant supporters in the French Socialist party hoped he might rejoin the presidential race but some analysts saw him as too tarnished.

Amid the scandal, he was forced to resign as head of the International Monetary Fund on May 19. Christine Lagarde, who just stepped down as French finance minister, takes over the top IMF job on Tuesday.

Enjoying his first taste of freedom since being pulled off a Paris-bound jetliner hours after the purported attack, Strauss-Kahn emerged from the townhouse where he had been under house arrest on Friday evening and was driven with his wife and another couple to Scalinatella, a pricey Italian restaurant on Manhattan's Upper East Side.

"We are absolutely convinced that while today is a first giant step in the right direction, the next step will lead to a complete dismissal of the charges," his lawyer, Benjamin Brafman, said.

The judge said prosecutors will reexamine the evidence after they revealed the housekeeper lied to a grand jury about her actions after the alleged attack and on tax and immigration documents.

The woman initially said that after Strauss-Kahn assaulted her, she had cowered in the hallway outside his room until he left and she felt safe to seek help. Now, prosecutors say, she admits she cleaned a nearby room and then returned to start cleaning Strauss-Kahn's suite before reporting the incident.

As Justice Michael Obus released Strauss-Kahn, he told the court: "I understand that the circumstances of this case have changed substantially and I agree the risk that he would not be here has receded quite a bit.

"There will be no rush to judgment. The people will continue to investigate and reexamine the matter as appropriate."

Strauss-Kahn, whose house arrest had included electronic monitoring and an armed guard, agreed to return to court as needed, including for a July 18 hearing.

His bail payment of $1 million and bond of $5 million were returned to him but his passport was not.

Prosecutor Joan Illuzzi-Orbon told the court "the facts of the sexual encounter was and is corroborated" but some details appear to have changed.

The woman's brother told Reuters in Guinea that she was the victim of a smear campaign.

Her lawyer, Kenneth Thompson, said after the hearing his client's story had never wavered and that Strauss-Kahn had bruised her badly and tore a ligament in her shoulder.

"The claim that this was consensual is a lie," Thompson told reporters. "She made some mistakes but that doesn't mean she is not a rape victim."

The case has hinged on the accuser, a 32-year-old Guinean immigrant who cleaned the $3,000-a-night suite at the Sofitel hotel in Manhattan where Strauss-Kahn was staying.

Quoting a well-placed law enforcement official, the paper reported on Friday that in particular, prosecutors were alarmed by a phone call the woman made within 28 hours of the alleged assault to a jailed boyfriend in Arizona.

The call was recorded but it was in a special dialect of the Guinean language of Puli. When the translation was finally completed on Wednesday, prosecutors were alarmed, the paper said.

"She says words to the effect of, 'Don't worry, this guy has a lot of money. I know what I'm doing,'" the paper quoted the official as saying.

It said their image of her as a pious, devout Muslim shattered by the experience slowly changed as they interviewed her, and more and more inconsistencies came to light.

"Sit-downs with prosecutors became tense, even angry. Initially composed, she later collapsed in tears and got down on the floor during questioning. She became unavailable to investigators from the district attorney's office for days at a time," the paper said.

It said the last meeting, on Thursday, was devastating. When investigators confronted her with bank records showing deposits of thousands of dollars in accounts in her name in Arizona, Georgia, New York and Pennsylvania, the woman, who had repeatedly said that her Sofitel job was her only source of income, became silent and turned to her lawyer for guidance.

"He was speechless," the paper quoted the official as saying.

Some commentators suggested that Strauss-Kahn, known as the "great seducer" of French politics, could have been set up.

His arrest opened the field for several other Socialist candidates for next April's presidential election, including party leader Martine Aubry, who trails colleague Francois Hollande in opinion polls.

Sarkozy, who nominated Strauss-Kahn for the IMF job, has not commented on the affair since his arrest. The case has prompted debate in France on gender equality and a media tradition of respecting the privacy of politicians' sex lives.

Nina Mitz, a former senior adviser to Strauss-Kahn at the French Ministry of Finance, said: "Today's stunning news can only make us regret that so much talent may have been wasted at a time when we all very much needed it."