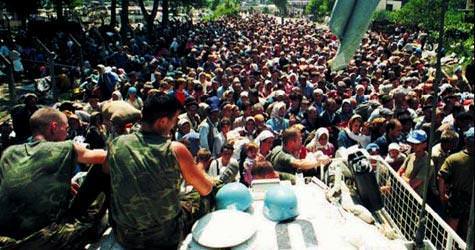 The Dutch state is responsible for the deaths of three Muslim men after the fall of Srebrenica during the Bosnian war, a Dutch appeals court ruled on Tuesday, opening the door to compensation claims.

The ruling will touch a raw nerve with the Dutch, whose troops were in charge of the U.N. "safe area" of Srebrenica and were accused of cowardice when Bosnian Serb troops overran the enclave in July 1995.

In the ensuing dangerous and confusing days, Bosnian Serb forces slaughtered 8,000 Muslim men and boys and buried them in mass graves in Europe's worst massacre since World War Two.

Relatives of a local electrician who assisted the Dutch but was killed at Srebrenica and the troops' local interpreter, whose father and brother are also believed to have died, lodged legal action against the Dutch state seeking damages.

The court ruled on Tuesday the state was responsible for the death of those men because U.N. troops from the Netherlands, known as Dutchbat, should not have allowed them to leave the safe area or fall into the hands of the Bosnian Serb forces.

"The Dutchbat had been witness to multiple incidents in which the Bosnian Serbs mistreated or killed male refugees outside the compound. The Dutch therefore knew that ... the men were at great risk if they were to leave the compound," the court said in its ruling.

Bosnian Muslim Hasan Nuhanovic, the local interpreter for the Dutch troops, told Reuters the state is now obliged to pay compensation, but he does not know how much.

The ruling can still be appealed to the Dutch Supreme Court.

A defense ministry spokesman said the ruling was "unexpected" after a lower court ruled in 2008 the state could not be held responsible, but added the government was still studying the ruling before deciding what further steps it might take.

Mothers and widows of Srebrenica victims blamed the Dutch force for the massacre, criticizing the troops for failing to resist the invading Bosnian Serb tanks and forces, who vastly outnumbered the lightly-armed Dutch troops.

Srebrenica survivor Sabaheta Fejzic, 55, whose only son and husband were killed in the massacre, said the ruling brings a small bit of justice to victims' families.

"The fact that the state is finally held responsible for this act of cowardice is relieving for the victims," Fejzic said.

Bosnian Serb general Ratko Mladic, who was ejected from the Yugoslavia war crimes courtroom on Monday after he refused to enter a plea, has been charged with genocide over Srebrenica.

The issue remains sensitive in the Netherlands, where the government resigned in 2002 after a report concluded it had sent Dutch troops on a "mission impossible.

Faced with several lawsuits in recent years over the massacre, the government has insisted its troops were abandoned by the United Nations, which provided no air support.

Like other NATO members which committed troops to Bosnia during the war under the banner of a U.N. Protection Force, Dutch hands were tied by a "dual-key" U.N. mandate that effectively prohibited armed intervention in the conflict.

A case launched by the group Mothers of Srebrenica against the Dutch state is now before the Supreme Court, where lawyers are seeking a referral to the European Court of Justice to also challenge the immunity of the United Nations.

Axel Hagedorn, a Dutch lawyer for the Mothers of Srebrenica, said although Tuesday's ruling was of "limited scope," it may assist his case when discussing the deaths of other people who had been at the Dutch base, but it could take many years.

In its ruling, the court said its decision only applied to the specific case of the three Muslim men and no ruling had been made over the situation of all the other Srebrenica refugees.

The prosecutor's office said last August it would look into whether Dutch soldiers should face criminal charges and a spokeswoman said on Monday prosecutors were still analyzing evidence. She declined to comment on Tuesday's ruling.