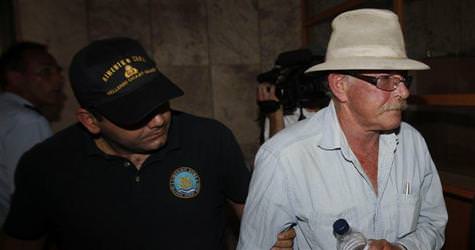 The Greek coastguard on Monday intercepted a Canadian ship which had set sail for Gaza carrying medicine and pro-Palestinian activists who had defied a ban by the Athens government, activists said.

The boat, named "Tahrir," had left a port on the island of Crete, a Reuters witness said. Greek authorities have said that ships carrying activists destined for Gaza with aid for Palestinians were prohibited from leaving Greek ports.

One activist in Athens told Reuters that the crew of more than 40 people comprised mostly Canadians, but also people from Belgium, France, Italy and Turkey.

"They (Greek coastguard) gained control of our boat. We all resisted but nobody is seriously injured," said activist David Heap, talking by telephone from the ship, adding:

"They seem to be taking us back to Crete, but our destination is and will remain Gaza. At this point, the boat has been seized but for the time being no one has been arrested."

Just over a year after nine activists were killed when Israeli marines stormed another pro-Palestinian flotilla, Greek authorities said on Friday that ships destined for Gaza were prohibited from leaving Greek ports -- even though they would be sailing into international waters.

Greece offered to ferry the humanitarian aid to the Palestinian Authority on Sunday after imposing the ban on the latest flotilla and arresting the captain of one of the boats.

But one of the activists, Huwaida Arraf, turned down the Greek proposal, saying: "This proposal ... is insufficient because it would be colluding with Israel's blockade. The issue is not just about the aid, it's about people's human rights."

In a telephone call with Palestinian President Mahmoud Abbas on Sunday, Greek Prime Minister George Papandreou had offered to ferry the humanitarian aid, mainly food and medicines, to Gaza in cooperation with the United Nations.

At the United Nations in New York, the "Quartet" of Middle East peace negotiators had issued a statement saying such flotillas by activists should be discouraged.

In a separate statement released on Sunday, Greece's Foreign Ministry said the Greek ban was imposed because of safety concerns and in line with a U.N. request and EU recommendations.

Israel says its blockade of Gaza is aimed at stopping weapons from reaching the enclave's rulers, Hamas -- an Islamist group that is branded a terrorist organisation by some Western nations.

A boat ferrying mostly American activists, "The Audacity of Hope," tried to leave Perama port near Piraeus on Saturday.

It was turned back by the coastguard, which said the captain, John Klusmire, 60, had been arrested and would appear before a court on Tuesday to face felony charges.

In Monday's interception, activist Jane Hirschmann said that 30 out of the activists had all said they were the captain to try to avoid a repetition of the earlier arrest.