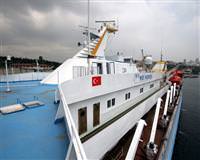 A U.N. report on Israel's bloody seizure of a Turkish ship trying to carry aid to Gaza will be published on July 27 after delays to enable talks between Israel and Turkey, an Israeli official said on Thursday.

The official, speaking on condition of anonymity, declined to discuss the findings of the committee set up by U.N. Secretary-General Ban Ki-moon and chaired by former New Zealand premier Geoffrey Palmer, saying only they had been finalized.

But another Israeli official, Finance Minister Yuval Steinitz, said earlier that previous drafts of the Palmer report indicated the panel would rule mostly in favor of Israel.

"From what we understand, the report justifies the (Gaza) blockade. It says the blockade is legitimate, that Israel took legitimate steps," he told reporters.

Steinitz, who sits in Prime Minister Benjamin Netanyahu's eight-member inner council, said the Palmer report would include "minor" criticism of the interception last year of the converted cruise ship Mavi Marmara as it tried to run the Gaza blockade.

Israeli marines killed nine pro-Palestinian activists from Turkey in fierce deck brawls. Both sides insist they acted in self-defense. Israel has voiced concern that criticism of its tactics could expose personnel to lawsuits and arrest abroad.

The Israelis say the blockade is warranted to prevent arms reaching the Gaza Strip's ruling Hamas Islamists, who are hostile to the Jewish state.

Palestinians and their supporters, including Turkey, see it as an illegal pressure on the heavily aid-dependent coastal strip.

The U.N. Human Rights Council, in a separate earlier probe boycotted by Israel as biased, condemned the blockade and the Mavi Marmara seizure.

"The (Palmer) report's compliance with international laws is very important to us, and an outcome that contradicts the U.N. Human Rights Commission report will be unacceptable," Turkish Foreign Minister Ahmet Davutoglu said on Wednesday.

The Turkish government, which says it was not directly involved the Mavi Marmara mission, has demanded Israel apologize for the casualties and offer compensation. Israel has agreed in principle to the latter only.

A senior Israeli official voiced hope that, given the regional upheaval of the Arab Spring, the Jewish state and its once-stalwart Muslim ally Turkey could heal the rift.

"But there is not much time before the Palmer report comes out, and we may not succeed," the official said, likening rapprochement talks held over recent months in Geneva and New York to "two porcupines trying to come together."