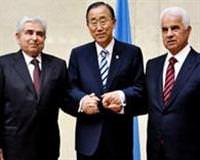 U.N. chief Ban Ki-moon called on leaders of divided Cyprus to overcome their differences by October with a view to ending a conflict harming Turkey's bid to join the European Union.

"I have every expectation that by October the leaders will be able to report they have reached convergence on all core issues and that we will meet that month in New York," Ban said in a statement read out in the presence of the two leaders.

Greek Cypriots represent the island internationally and in the EU, and say Turkey cannot join the bloc until the division of the island is resolved.

Ban, who also met the Cypriot leaders in January in a bid to add momentum to the talks, said the sides had worked steadily to take the negotiations forward since then.

"But progress has been far too slow," he said.

Eroğlu and Christofias canceled separate scheduled news conferences. No reason was given, but the U.N. has been at pains to keep the rhetoric down on a highly emotive subject which has normally ended with shadow boxing through the media.

Peace talks between the estranged Cypriot sides have been limping along since their re-launch in 2008. The talks are Cypriot-led, with a United Nations team acting as facilitator in the process.

But in an implicit acknowledgement that the present system had its flaws, Ban said the United Nations was prepared to offer enhanced involvement, without prejudice to the central principle that it was a Cypriot initiative.

In principle, both sides agree to reunite Cyprus as a two-zone federation, but the two sides have been unable to reconcile differences ranging from re-drawing existing boundaries, to property claims by thousands uprooted in conflict.

If the sides are able to reach convergence on all core issues -- defined by the UN as EU issues, economy, governance, property, security and territory -- it would pave the way toward convening a final, international conference, Ban said.

Diplomats say EU and economy issues have made good progress, some convergence has been reached on governance, but property, security and territory issues could be potential deal breakers.