Israel torn on apologizing to Turks over Gaza ship 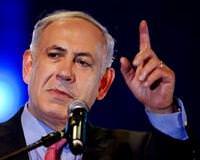 Israel is debating whether to say sorry for storming a Gaza-bound Turkish activist ship last year, after its jurists recommended satisfying Ankara's demand for an apology to help fend off war-crimes lawsuits.

Prime Minister Benjamin Netanyahu has so far voiced only "regret" for the navy's killing of nine pro-Palestinian Turks aboard the Mavi Marmara, but Israeli officials say support for a stronger show of contrition is spreading in his government.

Spurring the debate has been the imminent publication of a U.N. report on the seizure, which Israel predicts will mostly vindicate its Gaza blockade strategy while infuriating the Turks, who have said they would reject any such finding.

Hoping to avoid deepening the crisis, the former allies have been discussing a reconciliation deal, with Turkey insisting it include an Israeli apology. Netanyahu has not publicly responded but some top cabinet colleagues have voiced opposition.

"We are not ready to apologize, as apology, actually, is taking responsibility. You know, our soldiers on the Mavi Marmara were fighting to defend their lives," Vice Prime Minister Moshe Yaalon told foreign journalists on Thursday.

But other officials said Netanyahu had received legal advice that apologizing would forestall Turkish bids to prosecute, in international courts, the marines who clashed with activists while boarding the cruise ship on the Mediterranean high seas.

Defense Minister Ehud Barak, the lone center-left figure in Netanyahu's conservative coalition government, has called for compromise with Turkey "to put things behind us", citing the spiraling instability of a region where Israel lacks friends.

Asked whether Israel might change tack, Yaalon allowed that apologizing to Turkey "might be a debate" in the government and said his demurral was his personal opinion.

"We still have six days" to decide, he said, referring to Israel's announcement that the inquiry set up by U.N. Secretary-General Ban Ki-moon and chaired by former New Zealand Prime Minister Geoffrey Palmer would publish its findings on July 27.

The exact phrasing of an Israeli apology, should one be forthcoming, would have to be in "language that both sides can live with", a senior Turkish official told Reuters in Ankara.

Yaalon said Israel was willing to pay into a "humanitarian fund" for those bereaved or hurt aboard the ship. But Israel, having eased land crossings into Gaza, has signaled no change to a sea closure it says stems gun-running by Hamas militants.

Officials from both sides have been involved in the preparation of the Palmer report and are familiar with its contents.

The report would also "criticize the use of force by us," he said, but added this would not be tantamount to questioning the case-by-case conduct of marines who inflicted casualties.

Yaalon, a former chief of Israel's armed forces who in 2006 narrowly avoided an attempt by pro-Palestinian activists to have him arrested while on a visit to New Zealand, played down the importance of any Turkish help in averting legal actions.

Indemnification by Ankara, he said, would not be relevant in other countries where such "annoying" lawsuits can be pursued.

He added: "If we are ready to sacrifice our lives to defend the country, we should be ready to deal with this challenge."

An Israeli apology would incense Foreign Minister Avigdor Lieberman, Netanyahu's ultra-nationalist senior coalition partner, who has said the onus was on Turkey to make amends.

But Yaalon saw no threat of Lieberman leaving the government.

"The coalition is very strong," he said.