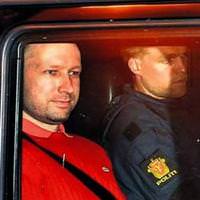 A Norwegian cabinet minister will make a symbolic return on Wednesday to her bomb-damaged office as the nation tries to restore some normality after the massacre by a right-winger whose lawyer believes is insane.

Friday's attacks by Anders Behring Breivik killed 76 and traumatized normally peaceful Norway, which has been struggling to come to terms with his cold-blooded shooting of young people and bomb attack in the heart of Oslo's government district.

Administration and Church Affairs Minister Rigmor Aasrud will be the first cabinet member to return to her normal office after the bomb blew a hole through the prime minister's office and badly damaged other buildings.

For the time being, Prime Minister Jens Stoltenberg will work from the defense ministry which is in another part of the city, and cabinet meetings will be held in a mediaeval fort near the Oslo waterfront. It is not clear whether the prime minister's 17-storey building will be rebuilt or torn down.

Breivik's lawyer said it was too early to say if his client would plead insanity at his trial, even though he thought the loner and computer games enthusiast was probably a madman.

"This whole case indicated that he is insane," lawyer Geir Lippestad said of the 32-year-old Breivik, who has confessed to "atrocious but necessary" actions, but denies he is a criminal.

Lippestad said Breivik had stated he belonged to a radical network that had two cells in Norway and more abroad. But police believe Breivik probably acted alone in staging his assaults, which have united Norwegians in revulsion.

"I can tell you on a general basis that so far we don't have any evidence of the cells, neither in Norway or in Britain," Janne Kristiansen, head of the PST security police, told the BBC. Breivik's online manifesto referred to a secret meeting in London in 2002 to found a 'Knights Templar' group to drive Islam out of Europe.

The BBC quoted Kristiansen as saying she rejected the theory that Breivik was insane, calling him calculating and evil.

Police detonated on Tuesday night a cache of explosives found at a farm rented by Breivik. No one was hurt in the controlled explosion about 160 km (100 miles) north of Oslo.

Police believe that Breivik made his bomb using fertilizer which he had bought under the cover that he was a farmer.

Justice Minister Knut Storberget deflected criticism that police reacted too slowly to the shootings, hailing their work after the attacks as "fantastic."

An armed SWAT team took more than an hour to reach Utoeya island, some 45 km from Oslo, where Breivik was coolly shooting youngsters at a Labor Party youth camp. He killed 68 there and eight in the earlier bombing in Oslo.

Many Norwegians seem to agree the police do not deserve opprobrium for their response. At a rally of more than 200,000 in Oslo on Monday night, people applauded rescue workers.

Police reopened some streets around the blast site and Oslo's main thoroughfare, Karl Johans Gate, is showered with flowers as Norwegians pay their respects to victims while nearby vendors gradually reopen for business.

Workers at a corner store about 150 meters from the blast painted on Tuesday the plywood boards put up in place of blown-out windows. Others were busy cleaning up inside.

"Fixing the glass (windows) will take a week or two and the wood looks better painted," said deputy store manager Aykan Bastas. "We will fix it up nicely, just like before."