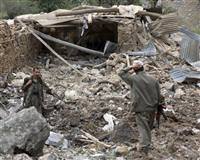 Iranian shelling in clashes with Kurdish rebels on the border with Iraq's northern region has killed two civilians and forced hundreds to flee their homes, local officials and aid agencies said on Monday.

Iranian troops have in the past fought along the frontier with Iraq's semi-autonomous Kurdish region with rebels from the PJAK, an Iranian offshoot of the PKK terrorists, a Kurdish group which fights for an ethnic homeland in Turkey.

The International Committee of the Red Cross said on Monday it was providing assistance to more than 800 displaced people in northern Iraq, all driven from their homes by the recent shelling in the mountains of Qandil.

Fleeing residents had settled in makeshift tents along the roadway near their abandoned villages near the Iranian border, leaving behind farmland, livestock and homes.

The Geneva-based International Organisation for Migration said it had also supplied a temporary clinic and relief supplies to the displaced on the border region.

Iran said on Friday a commander of Iran's Revolutionary Guards was killed in an explosion during clashes with Kurdish rebels in northwestern Iran. In April, Iran reported four Iranian border guards were killed by a grenade attack.

PJAK, which stands for the Free Life Party of Kurdistan, is branded a terrorist organization by both Tehran and Washington.

Iran has pledged to step up military action against the group, which is seeking greater autonomy for Kurdish areas in the country. PJAK has bases in the mountains where the borders of Iran, Iraq and Turkey meet.