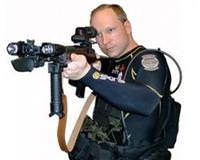 Police are increasingly certain that mass killer Anders Behring Breivik acted alone, but are leaving no stone unturned in the hunt for collaborators as they try to close one of the bloodiest chapters in Norway's history.

Breivik, 32, killed eight people in a bomb attack in central Oslo last Friday and then shot 68 at an island summer camp for the ruling Labor Party's youth wing.

He has told police he was part of a network in his self-styled "crusade" against Islam and multiculturalism -- but Norwegian authorities doubt this.

"So far we have no indication that he has any accomplices or that there are more cells," the head of the Norwegian Police Security Service, Janne Kristiansen, told Reuters on Wednesday. His claim was likely to have been a play for publicity, she said.

Kristiansen said there would be no let-up in hunting Breivik's possible partners, however unlikely, or in police monitoring of extremists.

"As long as there is a tiny chance...we have to investigate it -- that is our main focus," said Kristiansen, who added that Breivik was "too calculated, too focused" to be considered insane.

Norway's parliament has promised a review of the country's security services and their actions during Breivik's attacks. The government said on Wednesday it would pay the costs of burying the mostly teenaged and twenty-something victims.

Prime Minister Jens Stoltenberg urged his countrymen to participate in the open debate and democracy that Breivik had cruelly silenced at the camp.

Days after the attacks, Norwegians may be doing just that, with the Labor Party reporting a surge in applications. An opinion poll showed 80 percent believed the prime minister had performed "extremely well" in the crisis.

Staring at thousands of flowers outside Oslo cathedral in the sunshine, physiotherapist Aase Bergheim, 41, said she now saw Stoltenberg, and Norway, differently.

"The prime minister, I now see him in a new light, because he's shown he can gather the people. People are smiling at each other now. I don't usually vote for him, but maybe in future," she said.