Norway soul-searches on crime after rampage 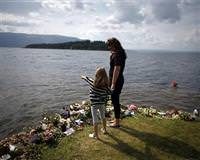 In a poll of nearly 1,300 people taken six days after the attacks that left Norwegians devastated, 65.5 percent said penalties were "too low" and 23.8 percent were happy with them, the Verdens Gang paper reported. More than half said their view had hardened since the mayhem that claimed 77 lives.

Anders Behring Breivik, 32, who confessed to the July 22 bombing in Oslo and the cold-blooded shootings on a nearby island, was charged by police with terrorism which carries a sentence of up to 21 years. This can be extended.

The case has caused public debate about the state of society in affluent Norway with politicians and voters scrutinizing crime and punishment as well as immigration and tolerance.

"We must listen and have a debate, while not drawing hasty conclusions ... It's important that policy isn't shaped in a state of panic," said Justice Minister Knut Storberget, who also told VG he was "not surprised" by calls for stricter laws.

At a special session of parliament Stoltenberg Monday commended Norwegians for their self-control in the 10 days since the worst attack on the normally peaceful Nordic nation since World War Two, saying they had renewed their commitment to an open society.

The broader aim of Breivik's attacks was to save Europe from "cultural Marxism" and "Muslim invasion," according to a manifesto published hours before the killings. The majority of the victims were teenagers at a Labor Party youth summer camp.

Many Norwegians have expressed relief that Breivik seems to have been a lone, home-grown fanatic rather than an envoy of a broader militant group. Many compare him to Timothy McVeigh who killed 168 people with a truck bomb in Oklahoma City in 1995.

"Everyone had to choose their own path in a landscape filled by shock, fear and despair," Stoltenberg said. "But the Norwegian people found their way home again."

Stoltenberg said many Norwegians may now wish they had positioned themselves differently on issues like immigration and tolerance but he urged parliamentarians to steer clear of measures that would curtail the country's democratic freedoms.

"I would like to ask from this podium that we avoid starting a witch-hunt on expression," he said.

The government also said it would hold a national ceremony of remembrance in Oslo on August 21, inviting relatives, survivors and rescue workers to the event.

Police said more than 200 witnesses have so far been interviewed and that Breivik himself faced more questioning this week that will be "more confrontational" than previous sessions.

"It's way too soon to say anything about whether he is insane or sane," said police prosecutor Paal-Fredrik Hjort Kragy, adding: "That is for the psychologists to decide and we will await their investigation."

If deemed a continuing danger to society Breivik could face an additional series of five-year protective custody sentences, and some have called for charges related to crimes against humanity that could give an initial sentence of up to 30 years.

Researchers doubt Breivik's claims that he is part of a wider far-right network of anti-Islam "crusaders," seeing them as empty bragging by a psychopathic fantasist who has written that exaggeration is a way to sow confusion among investigators.

Hanne Marthe Narud, a political scientist at the University of Oslo, said Norway's parliament was likely to stand against immediate public calls for harsher sentencing and more surveillance.

"A lot of these attitudes we see now are reflections of the terror event," she told Reuters, referring to the VG poll.

"I don't think the politicians will change legislation on this point as a spontaneous reaction. It may be considered, but there will be a broad debate first."

She said Norway was unlikely to see tougher security laws along the lines of the U.S. Patriot Act, which the U.S. Congress passed after the September 11, 2001, attacks.

"In 2001 it was as though someone had declared war against the United States, which al Qaeda and other groups had actually done," she said.

"This by contrast appears to be the act of one person who is sick or has his mind in a bubble. You can't really do legislation based on events like we have had in Norway."

She said public opinion has long favored stricter punishment for violent crimes while parliament has resisted cracking down.

The country's politicians agreed Monday that campaigning ahead of municipal elections due on September 12 should start on August 13.

Per Sandberg, chairman of the parliament's Justice Committee, said stiffer sentencing would be on the agenda when party leaders resumed debate later this month.

"I am sure ... the political discussion will be about sentences, searches by the police and everything else around this case," Sandberg told Reuters.

"My party has always wanted that. I believe there will be new measures."

In an "expression of solidarity," Turkey's foreign minister and a deputy prime minister attended the funeral of Gizem Dogan, a 17-year-old Turkish-born girl who lived in Norway for a decade before dying in Breivik's rampage.

The ceremony in Trondheim in central Norway was held in a soccer field to accommodate a crowd estimated at several thousand mourners.

"With its spirit of multiculturalism Norway is the best example for the future of humanity," Turkish Foreign Minister Ahmet Davutoglu said in a news conference in Oslo later in the day.

"I call on all Muslims in Norway from tomorrow to give one flower to their Norwegian neighbors showing that this is not an issue of religion or ethnicity but of being human."