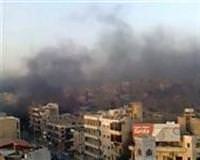 Syrian government forces pressed their assault on anti-government protestors in the city of Hama on Monday oblivious to a wave of condemnation from Western powers.

Tanks pounded residential neighborhoods across the city after evening prayers marking the first day of Ramadan, the Muslim holy month.

Earlier on Monday, at least four civilians were killed by tank fire on the second day of attacks on the city where memories are still vivid of the brutal suppression of an uprising in 1982.

"The shells are falling once every ten seconds," one witness told Reuters by phone. The thump of artillery and explosions could be heard in the background.

Appalled by the bloodshed, European powers relaunched a draft U.N. resolution to condemn President Bashar al-Assad's government for its crackdown on protesters, circulating a revised text to the Security Council at a meeting on Monday.

At least 122 civilians taking part in the protests calling for Assad to give up power have been killed since Sunday, according to witnesses, residents and rights campaigners.

About 85 of those were in Hama, where Assad's father crushed an armed Muslim Brotherhood revolt 29 years ago by razing neighborhoods and killing many thousands of people.

"No one can leave the town because the troops and shabbiha (pro-Assad militia) are shooting at random with machineguns," a resident, who gave his name as Raed, told Reuters by telephone.
Security forces, dominated by Assad's minority Alawite sect, had besieged Hama, a mainly Sunni Muslim city of 700,000, for nearly a month before the assault.

Analysts said that by choosing to crush the dissent there with overwhelming military force, Assad had chosen a path of no return against those clamoring for his overthrow.

His government is signaling to its critics abroad that it will not bow to calls for change that have swept across the Arab world, and to its people that it is prepared to wade through blood to stay in power.

"What has been clear is that the government is prepared to use force without limit," Beirut-based Middle East analyst Rami Khouri told Reuters. "But this is not solving the problem. instead, it is making the rebellion more robust."

Army tanks also stormed the eastern town of Albu Kamal after a two-week siege, activists in the region said, as the military steps up assaults aimed at subduing dissent in the tribal Deir al-Zor province bordering Iraq's Sunni heartland.

Government armor also stormed the town of Zabadani near the border with Lebanon after evening prayers, residents said.

More than 20 tanks and armored personnel carriers entered the resort town in the foothills of the Anti-Lebanon mountains after people demonstrated in support of Hama, witnesses said.

At least three protesters in Zabadani were wounded by machinegun fire from the tanks, two witnesses said.

Residents said at least 29 civilians had been killed in a weekend tank assault on Deir al-Zor, the provincial capital.
Syrian authorities have expelled most foreign journalists since the anti-Assad protests began in March, making it hard to verify activists' reports or official statements.

The U.N. Security Council is due to hold an emergency session on Syria later on Monday.

Practical council action on Syria, where rights groups say more than 1,600 people have been killed since the uprising began, has so far been paralyzed by disagreements within the 15-nation body.

Western European countries first circulated a draft resolution condemning two months ago but Russia and China, both allies of Damascus, threatened to veto it. Temporary council members Brazil, India, Lebanon and South Africa have also said they do not support it.

Critics have said they fear that even a simple condemnation could be the first step toward Western military intervention in Syria, as happened in Libya in March.

But Britain's U.N. Ambassador Mark Lyall Grant said the mood could be changing following the latest bloodshed in Hama.

"I think there are some indications that positions are shifting," Lyall Grant said before the meeting, noting that Russia had issued a statement deploring the latest violence.
Diplomats said the new version was updated to take in recent events but did not call for sanctions or a referral of Syrian leaders to the International Criminal Court.

"Moscow is seriously concerned by information about numerous casualties," the Russian Foreign Ministry said. "The use of force against civilians and representatives of state structures is unacceptable and must cease."

Turkey, one of Assad's main allies until the revolt, said it was shocked by the use of tanks to quell civilian protests. Most Arab countries have remained silent.

The 1982 Hama massacre instilled such fear that few Syrians were ready to challenge Assad family rule openly until this year, when many were inspired by the largely peaceful popular uprisings that toppled Arab autocrats in Egypt and Tunisia.

The Syrian leadership blames "armed terrorist groups" for most killings during the revolt, saying that more than 500 soldiers and security personnel have been killed.

The state news agency said the military entered Hama to purge armed groups that were terrorizing citizens, an account dismissed as "nonsense" by a U.S. diplomat in Damascus.

Footage posted on social media showed large parts of the city covered in smoke, and panic-stricken groups around dead or wounded people in the streets as gunfire rang out. Reuters could not independently verify the content of the videos.

U.S. President Barack Obama said he was appalled by the Syrian government's "horrifying" violence against its people in Hama and promised to work with others to isolate Assad.