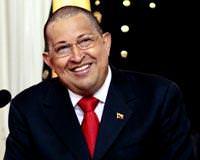 Venezuelan President Hugo Chavez appeared on television on Monday with his head closely shaved and bald patches from hair loss caused by chemotherapy for a cancer that has slowed him ahead of a re-election bid.

Wearing a somber suit and red tie, Chavez talked about the reasons for his hair loss, saying it was a sign the chemotherapy was working against fast-growing cells such as those associated with cancer.

"This is my new look," the president joked during his second hour-long appearance of the day and then held up a photograph of himself as a toddler with little hair. "I'm returning to my youth," he said.

A close friend of Cuban leader Fidel Castro, Chavez had a large tumor removed in Havana in June and has since been back to the Communist-led island for treatment. His illness raised doubts about his fitness to run in elections next year but he has looked stronger in recent days.

"Last night I had to call the barber and I said 'look, my hair is falling out,' because I went for a bath, I used the shampoo I always use and I felt, zas!, a bit fell out," he said earlier in a phone call to a breakfast show on state TV.

He says tests show he has no more malignant cells in his body but he expects to undergo two more rounds of chemotherapy "preventively."

He has not said what type of cancer he has, but on Monday denied it was colon, rectal or nose cancer. There have been reports Chavez had colon cancer.

Chavez, who has nationalized big parts of Venezuela's economy including foreign-owned oil projects, last month gave his vice-president powers to expropriate property and carry out other government functions when he is in Cuba for treatment.

Three ministers were missing from the event to swear in new senior officials, because, Chavez said, they had flu viruses and he could not risk being infected by them.

The corpulent former soldier, 57, has lost weight during his illness and says he has cut back from up to 40 cups of coffee a day to just two cups, supplemented by chamomile and green tea. He has started eating sardines on wholemeal bread in place of hot dogs, he said.

On Monday, Chavez's Foreign Minister Nicholas Maduro said the president would recover from his illness in time for the elections.