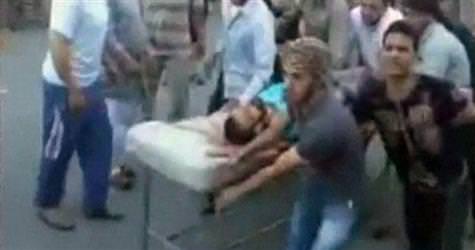 Syrian forces kept up attacks on Hama for a third day, residents said, while senators called on the Obama administration to impose tough new sanctions on Syria's energy sector.

Washington also sought to put muscle behind its demand that President Bashar al-Assad halt his lethal crackdown on unarmed protesters.

Human rights campaigners said the assaults by Assad's forces across Syria on Monday and Tuesday had killed at least 27 civilians, including 13 in Hama, where troops and tanks began an operation to regain control on Sunday.

That brought the total to about 137 dead throughout Syria in the past three days, 93 of them in Hama, according to witnesses, residents and rights campaigners.

The plight of Hama -- where thousands were killed in 1982 when security forces crushed an anti-government uprising -- has prompted many Syrians to stage solidarity marches since the start of Ramadan.

But Assad's tough response suggests he will resist calls for democratic change that have swept Syria for the past five months, and much of the Arab world this year.

"The United States should impose crippling sanctions in response to the murder of civilians by troops under the orders of President Assad," U.S. Senator Mark Kirk, a Republican, said in introducing legislation in Washington to target firms that invest in Syria's energy sector, purchase its oil or sell gasoline.

Kirk was joined in sponsoring the bill by Democratic Senator Kirsten Gillibrand and independent Senator Joseph Lieberman, who said it was time to push for "a democratic transition that reflects the will of the Syrian people."

While the United States weighed its next steps to respond to Assad's escalating suppression of protests, U.S. Secretary of State Hillary Clinton met with representatives of Syria's fledgling opposition who said the battered pro-democracy movement badly needed stronger U.S. support.

"We really need to see President Obama addressing the courage of the Syrian people," said Mohammad Alabdalla, one of the U.S.-based activists who met Clinton.

"We want to hear it loudly and clearly that Assad has to step down."

Obama and Clinton have said Assad has lost legitimacy, but have stopped short of directly calling on him to leave office as they did Egypt's Hosni Mubarak and Libya's Muammar Gaddafi.

The U.N. Security Council negotiated for a second day on Tuesday over a Western-backed draft resolution condemning Syria, before adjourning until Wednesday.

Diplomats said significant differences remained over the text and it had not been decided whether the end result should be a resolution or a less weighty council statement.

Russia and some other countries are pushing for what they say is a more balanced text that would blame both Syrian authorities and the opposition for the violence, but Western nations say the two sides cannot be equated.

The United States has already imposed sanctions on Assad and members of his government, and says it is weighing new sanctions including possibly on its oil and gas industry.

Tuesday night's shelling in Hama followed the pounding of residential areas across the city on Monday night. The renewed assault concentrated on the eastern Rubaii and al-Hamidiya neighborhoods, the Aleppo road in the north and the eastern Baath district, two residents said.

A crowd which tried to rally in the central Alamein neighbourhood after prayers marking the end of the daytime fast came under rifle fire by Assad's forces.

There were no immediate reports of casualties. Rights campaigners earlier said five civilians were killed on Tuesday as tanks thrust further into the central Syrian city of 700,000.

Elsewhere, dozens of people were wounded when demonstrators demanding the toppling of Assad in the western Damascus suburb of Mouadhamiya, the northeastern city of Hasaka, and the port city of Latakia came under fire after the nightly prayers, residents said.

"Ten buses full of 'amn' (security) entered Mouadhamiya. I saw 10 youths falling down as I was running away from the gunfire. Hundreds of parents are in the streets looking for their sons," said one witness living the suburb, 30 km (20 miles) from the occupied Golan Heights.

A brief riot appeared to have broken out late on Monday at Hama's main prison. Two shabbiha militia buses were seen heading there at night and smoke rose from the compound as the militiamen shouted "God, Syria, Bashar, only" from inside.

In the eastern Damascus suburb of Erbin, a witness told Reuters that one mourner was killed on Tuesday when Assad's forces fired at a funeral for five residents shot dead by security forces in a rampage there on Monday.

"The funeral went out of the big mosque in Erbin's main square in the afternoon. There were thousands of mourners. They came under fire as soon as they began chanting 'the people want the downfall of the regime'," said the witness, a small business owner who did not want to be further identified.

Syria's state news agency SANA said "hundreds of masked gunmen on motorbikes" had set fire to the main law court in Hama on Monday afternoon and had also vandalized much of the building.

SANA said "armed terrorist groups" had killed eight policemen in Hama. The government blames such groups for most killings in the five-month-old revolt, saying more than 500 soldiers and security personnel have died.

Syria has incurred international opprobrium for its harsh measures but need not fear the kind of foreign military intervention that NATO launched to support rebels in Libya.

The senior U.S. military officer called for a swift end to violence in Syria, but only diplomatic pressure was in view.

"There's no indication whatsoever that...we would get involved directly with respect to this," Admiral Mike Mullen, chairman of the Joint Chiefs of Staff, said in Baghdad.