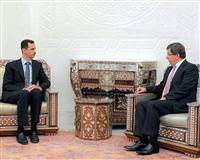 Syrian President Bashar al-Assad said on Tuesday his forces would continue to pursue "terrorist groups" after Turkey pressed him to end a military assault aimed at crushing protests against his rule.

Syria "will not relent in pursuing the terrorist groups in order to protect the stability of the country and the security of the citizens," state news agency SANA quoted Assad as telling Turkish Foreign Minister Ahmet Davutoğlu.
"But (Syria) is also determined to continue reforms ... and is open to any help offered by friendly and brotherly states."
While the two men held talks in Damascus, Syrian forces killed at least 30 people and moved into a town near the Turkish border, an activist group said.
The National Organization for Human Rights said most of the fatalities occurred when troops backed by tanks and armored vehicles overran villages north of Hama, while four were killed in Binnish, 30 km (20 miles) from the border with Turkey.
Washington expressed disappointment at Assad's latest comments and said U.S. Secretary of State Hillary Clinton expected to talk to Davutoğlu after his meetings in Syria.
"It is deeply regrettable that President Assad does not seem to be hearing the increasingly loud voice of the international community," U.S. State Department spokeswoman Victoria Nuland told reporters when asked about the comment.
She refused to comment directly on a 2009 U.S. diplomatic cable quoted by McClatchy newspapers last week describing Assad in unflattering terms, calling him "neither as shrewd nor as long-winded as his father" (former president Hafez al-Assad).
Despite the growing international condemnation, including a sudden wave of Arab criticism, Assad's forces pursued an offensive in the eastern city of Deir al-Zor, residents said.
Activists say at least 1,600 civilians have died since the uprising against Assad erupted in March, making it one of the bloodiest of the upheavals sweeping the Arab world.
PEACEFUL TRANSITION
Davutoğlu held six hours of meetings with Syrian officials, including a two-hour session alone with Assad.
He told reporters on his return to Ankara that Turkey had demanded Damascus stop killing civilians and said his government would maintain contacts with all parts of Syrian society.
Davutoğlu said Turkey hoped for a peaceful transition in Syria resulting in the Syrian people deciding their own future.
Neighboring Turkey has grown increasingly critical of the violence but earned a sharp rebuke on Sunday when an Assad adviser said Syria would not accept interference in its affairs.
Syria has faced nearly five months of protests against Assad's 11-year rule, inspired by Arab revolts which overthrew leaders in Egypt and Tunisia earlier this year.
Last week Assad sent troops and tanks to quell the mostly Sunni Muslim city of Hama in central Syria and the army launched a similar assault on Sunday against Deir al-Zor.
An armored column also pushed towards the centre of the city on Tuesday, with troops storming houses and making arrests in the provincial capital of an oil region bordering Iraq's Sunni heartland, a resident said.
"They are now about one kilometer from downtown. When they finish with one district, they move to another," said the resident, who gave his name as Iyad.
Increasing the pressure on Assad, Sunni Muslim power Saudi Arabia issued a blunt warning that he risked turmoil unless he stopped the bloodshed and adopted reforms. Kuwait and Bahrain followed the kingdom in recalling their ambassadors.
The withdrawal of envoys left Assad with few diplomatic friends bar Iran. Western states have imposed sanctions on his top officials, while states with close ties to Damascus such as Russia and Turkey have warned Assad he is running out of time.
Nevertheless, no country has proposed military action such as that launched against Libya's leader Muammar Gaddafi.
ASSAULT
In Deir al-Zor, a resident said on Monday 65 people had been killed since tanks and armored vehicles barreled into the city, 400 km (250 miles) northeast of Damascus on Sunday.
The British-based Syrian Observatory of Human Rights said among the dead were a mother and her two children, an elderly woman and a girl. Syria has expelled most independent media since the revolt began, making it hard to confirm accounts.
Syrian authorities have denied that any Deir al-Zor assault took place. They say they have faced attacks since the protests erupted in March, blaming armed saboteurs for civilian deaths and accusing them of killing 500 security personnel.
State television broadcast footage on Sunday of mutilated bodies floating in the Orontes river in Hama, saying 17 police had been ambushed and killed in the central Syrian city.
The official SANA news agency said on Monday the military was starting to pull out of Hama after it said they had helped restore order. Residents said there were still tanks in parts of the city and security forces were making arrests.
About 1,500 people were detained in Hama's Jarajima district and troops killed three civilians, the Observatory said.
Activists say at least 130 people were killed in Hama, where Assad's father crushed an armed Islamist uprising in 1982, and one group has put the death toll at over 300.
Like most of Syria, ruled by Assad's minority Alawite family, Hama and Deir al-Zor are mainly Sunni cities, and the crackdowns there resonate with Sunnis, who form the majority in the region and govern most Arab countries.