Third plane departs while a ship is on its way 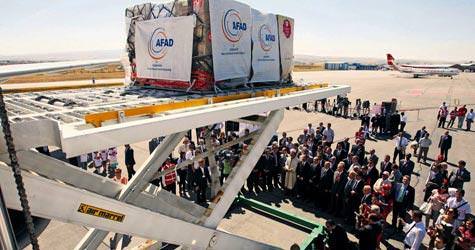 While visiting the camps in Somalia, Turkey’s Red Crescent General Manager Ömer Taşlı states that this is currently a grave tragedy of humanity and that it was difficult for people to get to the aid.

Turkey has taken action to help the humanitarian drama that is ongoing in Somalia. The total donations gathered from the campaign led by SABAH Newspaper, Turkish Red Crescent and TİKA have reached 18 million liras. Thousands of tons of food have been brought in by plane. Arriving in Mogadishu, the distribution of aid has already begun.
A GOODWILL SHIP TO DEPART
After the third plane from Ankara reaches Somalia, A 'Goodwill Ship' carrying 5,000 tons of aid will depart the Istanbul Container Export Port on Monday, all a part of the campaign led by SABAH. The boats will contain boxes of food; medical supplies, infant care supplies as well as a drilling machine and an excavation team, all intended to solve the water problem, a crucial factor in the drought in Somalia.
The Somali government has allocated an approximate 5,000 square meters of closed and 10,000 of open air storage facilities for the humanitarian aid to be unloaded from the Turkish Red Crescent ship.
RED CRESCENT SENDS TENT TOWNS
The Turkish Red Crescent also requested a 250,000 to 400,000 square-meter area be allocated. There, the Red Crescent will set up a tent town consisting of 2,000 tents to accommodate 12000. These tents will accommodate those staying in Somali camps with no infrastructure. Turkish Red Crescent and TİKA teams began distributing the aid sent from Turkey in the Hamar Jejep camp located in the capital Mogadishu. Tickets were handed out in order to prevent a stampede, as the numbers were high in the camp with starving people having arrived to the camp from afar either on foot or in truck beds.
CHILDREN ARE DYING FROM DIARRHEA
According to observations from Turkish Red Crescent General Manager Ömer Taşlı, who is currently in Somalia in order to organize the distribution of aid, what is transpiring in the nation constitutes as a great tragedy. Taşlı describes the latest situation in the country after closer inspection of the camps.
"People are struggling with death in primitive shelters built from twigs. An elderly woman got down on her knees as soon as she saw our team. She began begging 'save my child from dying'. This human tragedy is unbearable. A four-month old baby, named Vikale is going to die from the very simple ailments of diarrhea and a fever all because there are no supplies. Millions of dollars of aid is being collected. However, by stating 'there is no state and no security,' all of these aid establishments are incapable of getting the aid out to the people. The aid collected by international aid foundations, is only accessible to 30 percent of the public. As Turkey's Red Crescent, we will be bringing humanitarian aid directly to over 90 percent of the public. We will change this system."
United Nations Special Representative to Somalia Augustine Mahiga made an announcement, stating "Each day in Somalia there are 13 children under the age of five that are losing their lives to starvation."
EIGHT-YEAR OLD DONATES THE MONEY IN HIS PIGGY BANK
Eight-year-old Adem Mert Yarar, who is from Konya's Akşehir district, donated the 300 liras he had collected in his piggy bank by giving it to his teacher to pass it on to the people in Somalia. Adem Mert explained that he was extremely affected by a photograph of a mother in Africa with a still child in her lap.

SHIPS FULL OF KINDNESS
By Bank: All banks in turkey have an account designation for donations for Turkey's Red Crescent.
To donate to the Prime Ministry Turkish Cooperation and Recovery Administration (TİKA), the account number at Halkbank is Branch code: 408
TL: 05000014
Dollar: 58000095
Euro: 58000096
INTERNET: www.kizilay.org.tr
TELEPHONE: 168 is a free donation and information line.
POST OFFICE: 2868 number Red Crescent Postal check.
RED CRESCENT: All Red Crescent branches.
To DONATE BY SMS MESSAGING: Write Sabah and send to 2868 to donate 5 TL.
TO SEND A TURKISH RED CRESCENT KITCHEN SET-FOOD BOX: With a 200 TL donation, one five-member family could be fed for one month.