Twenty-years since the beginning of the end 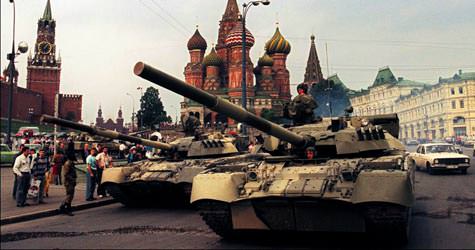 Twenty years after a coup in which hardline communists made a last, desperate attempt to save the Soviet Union, Russia is still traveling the long and bumpy road to democracy.

The end of the Soviet empire inspired dreams of a better life that have been at least partly fulfilled for many, though not all, Russians. But politics is still dominated by one man, Vladimir Putin, under a system which few regard as a panacea.

Many of those who stood for three days outside the Russian parliament headquarters, risking their lives to defend it against army tanks, had hoped for more.

"It felt like a new beginning. We felt we could do anything," said Milena Orlova, then a student and now an art critic, who was one of thousands who defended the White House parliament building in Moscow in August 1991.

"Some of our dreams have been realized. We've managed to travel abroad, some of my friends have done very well and artists have tasted freedom. But democracy has gone backwards. I thought we would have got further by now."

Polls suggest opinion is divided about the coup and the fall of the Soviet Union. Some Russians, mainly older people, still yearn for the predictability and stability of Communist times and there is little official fanfare to mark the anniversary.

Few remember the names of the coup leaders and are hazy about the significance of the putsch, but historians say its failure showed Russians had finally lost the fear of the party and its power structures on which the Soviet system was based.

"It was the last nail in the coffin of the Soviet Union," said Anton Fedyashin, a historian specializing in Russia at the American University in Washington.

"Looking back, it was one of the most astounding examples of historical events where the result achieved was exactly the opposite of what the perpetrators set out to do. It was a historical catalyst for the end of the Soviet Union."

Many historians and political analysts divide the 20 years that have followed into two periods -- Yeltsin's chaotic rule until the end of 1999 and the more stable Putin era since then.

They disagree about how successful the transition has been but broadly agree that ordinary Russians still feel they have little impact on how the country is run.

"Russia still has what is just an imitation of democracy," said Olga Kryshtanovskaya, head of the Centre for Elites at the Russian Academy of Sciences Institute of Sociology.

"People feel it doesn't matter how they vote, that if Putin goes, someone else will come along who's just like him. They're resigned to it because they think the Russian state has been like this for centuries and it won't change."

Under Yeltsin's "shock therapy" reforms, Soviet assets and raw materials were sold off cheaply to a few businessmen, later known as the oligarchs, who amassed fortunes and political influence while ordinary people struggled to make ends meet.

The media won unprecedented freedom and new political parties grew up, but corruption was rife and the rule of law collapsed. Yeltsin suffered from heart problems and rumors that he drank too much, and his liberal credentials were undermined by the war he launched with the breakaway Chechnya region.

"It's difficult to call the 1990s a successful transition, especially compared to what was happening in central Europe, where a lot of countries adapted better to democracy," Fedyashin said.

Yeltsin resigned on the last day of 1999 and ceded the presidency to his preferred successor, Putin, who was then elected in March 2000. The former KGB spy is still Russia's dominant politician despite stepping aside in favor of his protege, Dmitry Medvedev, to become prime minister in 2008 because the constitution forbade a third successive term.

Backers say Putin has overseen economic and political stability, strengthened a state that was in a mess and presided over an increase in private incomes. They underline that the Russian economy managed to withstand the 2008 financial crisis.

But critics say Putin was lucky because of an economic boom in the first years of his presidency that was more to do with a surge in global energy prices than his own policies. They say he has resisted economic reforms and built an authoritarian political system that has little semblance of democracy.

"We can blame both Yeltsin and Putin for not using their opportunities better," said Nikolai Petrov, a political analyst at the Moscow Carnegie Center.

"Yeltsin had huge support to carry things out and Putin benefited from sudden prosperity in Russia that he could have made better use of. Great expectations have for many become great disappointment."

Political analysts say Russia's road to democracy was always going to be long and tough and that its achievements should not be underestimated. They also say it should not necessarily be judged by comparisons with Western-style democracy.

"While Yeltsin's Russia was inclined to imitate Western models, the Russia of Putin and Medvedev is trying to come up with a model of its own," analysts Ivan Krastev, Mark Leonard and Andrew Wilson wrote in an essay.

Just what that model is, or will be, is not yet clear. The Kremlin has talked about "sovereign democracy," which allows for the domination of a single party, and the current buzzword is "modernization."

Few would disagree that modernizing Russia's economy, to reduce its heavy reliance on energy exports, as well as its politics is vital. But who will lead that modernization after the next presidential election, due in March, is not clear.

Putin is widely expected to return as president if he wishes but Medvedev has indicated a desire to stay on if his mentor decides not to run again. Either would be all but certain to win because of strong opinion poll ratings, the lack of a genuine alternative and the Kremlin's grip on the media.

Some businessmen fear Putin has come to stand for stagnation and this would not augur well for Russia. But pressure for change is building and signs of discontent are growing, analysts and critics of the system say.

"Modernization can be carried out only if the people, the entire population, are included in the whole process," Gorbachev told Reuters in an interview last year. "We need democracy, we need improvement of the electoral system and so on. Without that, we will not succeed."

Since then he has been more direct in criticizing Putin, 58, and urged him not to run for president again.

A former Yeltsin aide, Gennnady Burbulis, says the Russian Federation risks the same fate as the Soviet Union if reforms are not carried out soon and more investment is not made into Russia's creaking infrastructure.

"The threat is huge if this regime is unable to transform itself. The threat eventually is the disintegration of Russia," Burbulis said.