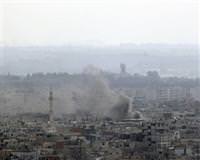 Syrian troops raided houses in a Sunni district of the besieged port of Latakia on Wednesday, arresting hundreds of people and taking them to a stadium after a four-day tank assault to crush protests against President Bashar al-Assad, residents said.

Assad's forces attacked al-Raml, a seafront area named after a Palestinian refugee camp built in the 1950s, at the weekend as part of a fierce campaign to crush a five-month-old uprising.

Some Palestinians have joined in demonstrations against Assad, even though Syria hosts exiled leaders of the Islamist Palestinian Hamas movement and other Palestinian groups.

Latakia is of particular significance to Assad, from Syria's minority Alawite community. The 45-year-old president, a self-declared champion of the Palestinian cause, comes from a village to the southeast, where his father is buried. The Assad family, along with friends, control the city's port and its finances.

"Shelling and the sound of tank machineguns subsided today. They are bussing hundreds to the Sports City from al-Raml. People who are picked up randomly from elsewhere in Latakia are also being taken there," said a resident.

"Tanks are continuing to deploy, they are now in the main Thawra (revolution) street," said the resident, a university student who did not want to be identified.

Chris Gunness, spokesman for the U.N. Relief and Works Agency for Palestinian Refugees, said three refugees had been killed at the camp. Many had been wounded in the assault.

"UNRWA's information indicates that most of the inhabitants have indeed left and that there are only five to 10 vulnerable families remaining, unable to physically leave," Gunness said.

He said about 150 families had fled to the city of Homs, in central Syria, where anti-Assad unrest has also been put down.

Syrian forces killed nine people in Homs on Wednesday, activists said, including two protesters shot dead by pro-Assad militiamen, known as shabbiha, in front of the Fatima mosque in the district of al-Waar after Ramadan prayers.

Syria has expelled most independent media since the unrest began, making it difficult to verify reports from the country.

Local activists said an unknown number of refugees from Latakia had fled to the northwestern border with Turkey, which had received over 10,000 refugees from earlier assaults by Assad's forces on Idlib province to the north of Latakia.

Turkey's Prime Minister Tayyip Erdogan compared the situation in Syria with that in Libya, where rebels have been fighting forces loyal to Muammar Gaddafi since February.

"We have done our best on Libya, but haven't been able to generate any results. So it's an international issue now. Gaddafi could not meet our expectations, and the outcome was obvious," Erdogan told reporters.

"Now the same situation is going on in Syria. I've sent my foreign minister, and personally got in touch many times, the last of them three days ago on the phone. In spite of all this, civilians are still getting killed."

A diplomat in the Syrian capital said: "The reports about detention conditions and torture are increasingly alarming. Assad is backing himself more into a corner by using more and more violence and turning more Syrians against him."

Assad, however, issued a hardline message, telling ruling Baath Party officials: "Reform in Syria springs from conviction... and not in response to any outside pressures.

The state news agency quoted him as saying Syria was being targeted "to weaken its role in the resistance (to Israel) and in defending legitimate Arab rights."

Assad had sought to improve his image internationally in recent years by emphasizing economic reforms, engaging in peace talks with Israel and accepting Western overtures to lessen his isolation in return for cooperating on Lebanon and Iraq.

But he also strengthened ties with Iran and the Lebanese Shi'ite guerrilla group Hezbollah, his two remaining solid allies, to the disquiet of Syria's Sunni Muslim population.

Assad's crackdown has caused a chorus of international condemnation. "The bloodshed has to stop, first and foremost," Turkish Foreign Minister Ahmet Davutoglu said. "If the operations continue in Syria and the operations become a regional problem Turkey can naturally not remain indifferent."

Citing witnesses in Latakia, the Syrian Observatory for Human Rights said a force of around 700 security personnel fanned across the al-Raml district, with houses demolished there "on the pretext they lacked construction permits."

"The Sports City's stadiums are serving to house refugees and prevent them from fleeing outside Latakia, and as we have seen in other cities that were assaulted, as a detention center," Observatory Director Rami Abdelrahman told Reuters.

Syrian authorities blame others for the violence, saying terrorist groups" have killed 500 soldiers and police. Rights organizations say at least 1,700 civilians have been killed by security forces since protests erupted in March.