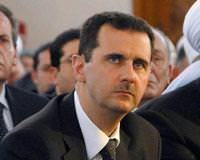 In a phone call with Assad on Wednesday, Ban "expressed alarm at the latest reports of continued widespread violations of human rights and excessive use of force by Syrian security forces against civilians across Syria, including in the Al Ramel district of Lattakia, home to several thousands of Palestinian refugees," the United Nations said in a statement.

"The Secretary-General emphasized that all military operations and mass arrests must cease immediately. President Assad said that the military and police operations had stopped," the statement added.