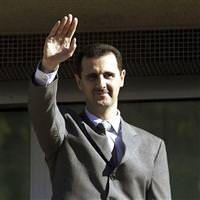 Syrian President Bashar al-Assad's pledge that he has halted his crackdown on a five-month uprising will be tested on Friday when protesters are expected to call for his downfall, backed for the first time by the United States and Europe.

The main Friday Muslim prayers have been a launch pad for huge demonstrations across the country and, until Assad stepped up military assaults against protest centres this month, had seen some of some of the heaviest violence.

The escalated crackdown prompted coordinated calls from the United States and European Union on Thursday for Assad to step down and Washington slapped sweeping new sanctions on Damascus.

Adding to the international pressure, U.N. investigators said Assad's forces had committed violations that may amount to crimes against humanity in a campaign which killed at least 1,900 civilians. The United Nations plans to send a team to Syria on Saturday to assess the humanitarian situation there.

"The future of Syria must be determined by its people, but President Bashar al-Assad is standing in their way," Obama said. "His calls for dialogue and reform have rung hollow while he is imprisoning, torturing and slaughtering his own people."

Simultaneously, European Union foreign policy chief Catherine Ashton called on Assad to step aside and said the EU was preparing to broaden its own sanctions against Syria.

The United States, Britain and European allies said on Thursday they would draft a U.N. Security Council sanctions resolution on Syria.

"The Syrian government has not changed course," Britain's deputy U.N. ambassador, Philip Parham, told reporters after a closed-door council meeting on Syria. "In fact, if anything, its actions over the last two weeks have escalated."

"The time has come for the council to take further actions to step up the pressure against those who are responsible for the violence against the citizens of Syria," Parham said.

It was a dramatic sharpening of rhetoric from Western powers that for months had instead pressed Assad to reform. But with no threat of Western military action like that against Libya's Muammar Gaddafi, Assad's conflict with his opponents seems likely to grind on in the streets.

In a call to Assad on Wednesday U.N. Secretary-General Ban Ki-moon said all military operations and mass arrests must cease immediately. "President Assad said that the military and police operations had stopped," a U.N. statement said.

But a grassroots activist group, the Syrian Revolution Coordinating Union, said Assad's forces killed at least one man when they fired live ammunition to stop residents from marching after evening prayers on Thursday in Homs, north of Damascus.

Similar attacks occurred in the Houla Plain north of Homs and in the town of Qusair on the Lebanese border but there were no immediate reports of casualties, the group said.

Last Friday activists said Syrian forces shot dead at least 20 protesters, as tens of thousands demanded Assad's overthrow and chanted "we will kneel only to God".

It may take time for the diplomatic broadside, backed by the new sanctions, to have an impact on the 45-year-old president who took power when his father President Hafez al-Assad died 11 years ago after three decades in office.

Syria's U.N. ambassador, Bashar Ja'afari, accused Washington of waging a "diplomatic and humanitarian war" against Syria along with some other Security Council members.

"These countries are trying to settle their old accounts with my country," he said. "These forces have nothing but hatred against my country and my nation."

Assad has so far brushed off international pressure and survived years of U.S. and European isolation following the 2005 assassination of Lebanese statesman Rafik al-Hariri, a killing many Western nations held Damascus responsible for.

But as well as Western condemnation, Syria also faces criticism from Arab states and its northern neighbour Turkey.

"It could backfire in the sense that it's not going to moderate the behaviour of the regime, quite the contrary .... The distinct possibility now is that he will become more defiant," Hollis said.

Nadim Shehadi, a Chatham House associate fellow, Middle East and North Africa programme, said previous messages from the West were "ambiguous" and had encouraged Assad to stay in power.

"They gave him carte blanche, a licence to kill," he said.

Syria's economy, already hit by a collapse in tourism revenue, could be further damaged by Obama's announcement. U.S. sanctions will make it very difficult for banks to finance transactions involving Syrian oil exports.

It will make it also challenging for companies with a large U.S. presence, such as Shell, to continue producing crude in Syria -- although the impact on global oil markets from a potential shutdown of Syria's 380,000 barrels per day oil industry would be small compared to that of Libya.

Assad says the protests are a foreign conspiracy to divide Syria and said last week his army would "not relent in pursuing terrorist groups". Syrian officials say 500 police and soldiers have been killed by armed groups they blame for the violence.

Syria has expelled most independent media since the unrest began, making it difficult to verify reports from the country.

U.N. investigators said Syrian forces had fired on peaceful protesters, often at short range, killing at least 1,900 civilians including children. Their wounds were "consistent with an apparent shoot-to-kill policy", their report said.

Some were reported to have been finished off with knives.

"The mission found a pattern of human rights violations that constitutes widespread or systematic attacks against the civilian population, which may amount to crimes against humanity," it said, specifically citing the Rome Statutes of the International Criminal Court (ICC).

There was a "clear pattern of snipers shooting at demonstrators", and in some cases targeting people trying to evacuate the wounded. In hospitals "there were several reports of security forces killing injured victims by putting them alive in refrigerators in hospital morgues".

U.N. human rights chief Navi Pillay suggested to the Security Council it might consider referring the case of Syria to the International Criminal Court (ICC) in The Hague.