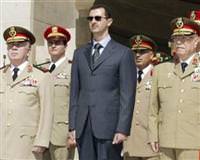 Syrian forces killed dozens of protesters on Friday despite assurances by President Bashar al-Assad that a crackdown was over, and thousands of people rallied across the Arab nation with renewed vigor demanding political freedoms.

Activists said at least 34 people, including four children, were shot dead by Assad's forces in the southern province of Deraa, where the uprising against Assad erupted in March, the city of Homs, 165 km (100 miles) north of Damascus, suburbs of the capital and in the ancient desert city of Palmyra.

Firing was concentrated on al-Khalidiya district, the activists said, adding that electricity and land phone lines in the city had been cut after protests on Friday.

"The protests took a carnival-like atmosphere and the ante was raised a notch higher, hence we are seeing this response," an activist contacted in the city said.

He was referring to the displaying of shoes as a sign of contempt for Assad during demonstrations demanding his removal.

"We want revenge against Maher and Bashar," others shouted, referring to the Syrian leader and his powerful brother -- a military commander accused by diplomats and residents of attacking cities and cracking down on pro-democracy protests.

Encouraged by growing global pressure on Assad, the Syrian opposition in exile said it would set up a National Council in Turkey on Sunday to support the uprising and help fill any power vacuum should the protests succeed in ousting Assad.

Similar initiatives in the past have failed to produce a robust umbrella group to unite the opposition, fragmented by 41 years of Assad's harsh rule.

Assad, from the minority Alawite sect in the mostly Sunni Muslim nation, told U.N. Secretary-General Ban Ki-moon this week that military and police operations had stopped. But activists say his forces are still shooting at protesters.

The violent repression prompted coordinated calls from the United States and European Union on Thursday for Assad to step down and Washington imposed sweeping new sanctions on Syria, which borders Israel, Lebanon and Iraq and is an ally of Iran.

On Friday, European Union states agreed to expand the number of Syrian officials and institutions targeted by EU sanctions and laid out plans for a possible oil embargo. Syria exports over a third of its 385,000 barrels per day output to Europe.

Activists said five people were killed and 15 wounded in the ancient desert city of Palmyra, when Assad's forces opened fire during a demonstration.

"The people want the execution of the president," shouted a crowd in the northern Idlib province. Some carried banners with slogans proclaiming "Signs of Victory."

Local activist Abdallah Aba Zaid said 18 people were killed in Deraa province, including eight in the town of Ghabaghab, five in Hirak, four in Inkhil and one in Nawa. Dozens of people were wounded, he said.

State television blamed the deaths in Ghabaghab on gunmen who attacked a police post, killing a policeman and a civilian and wounding two. It said two members of the security forces and one gunman were killed in a clash in Harasta, near Damascus.

Syria has expelled most independent media since the unrest began, making it difficult to verify events on the ground. The United Nations says 2,000 civilians have been killed. Authorities blame "armed terrorist groups" and Islamists for the bloodshed and say 500 soldiers and police have been killed.

Internet footage of Friday's protests suggested that, although widespread, they were smaller than at their peak in July, before Assad sent tanks and troops into several cities.

But activists say protests have spread to more cities and become more frequent despite assaults that have intensified since the beginning of the Muslim fasting month of Ramadan.

A doctor in Zabadani, 30 km (20 miles) northeast of Damascus, said army vehicles were in the town and snipers were on rooftops to prevent crowds marching.

Protesters from the Sunni majority resent the power and wealth amassed by some Alawites, who adhere to an offshoot of Shi'ite Islam, and the near monopoly of the sect on the security apparatus. They want Assad to quit, the dismantling of the police state and a transition to democracy.

Adding to international pressure, U.N. investigators said Assad's forces had committed violations that may amount to crimes against humanity. The United Nations plans to send a team to Syria on Saturday to assess the humanitarian situation.

The United States, Britain and European allies say they will draft a U.N. Security Council sanctions resolution on Syria.

Despite the dramatic sharpening of Western rhetoric, there is no threat of Western military action like that against Libya's Muammar Gaddafi, meaning Assad's conflict with his opponents seems likely to grind on in the streets.