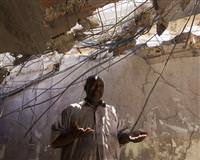 NATO confirmed it had aircraft deployed over Tripoli, but could not confirm it had bombed Gaddafi's compound.

Explosions were heard inside the compound, Arabiya reported, with fighting mostly concentrated on the western side.

"The revolutionaries are trying to get in through the Old Gate on the western side. If they're successful, the fighting will move inside the compound," Muftah Ahmad Othman, a rebel in Tripoli, told the news channel.

Britain's Sky TV also reported that smoke could be seen billowing from the compound following a NATO air strike.

Located in the southern center of Tripoli, the six square km complex is home to Gaddafi's private quarters as well as a military barracks and other installations.