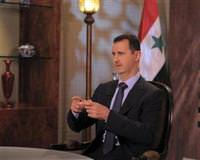 Syrian forces stormed a town on the main road leading to Turkey Sunday after troops loyal to President Bashar al-Assad fought a night-time battle in Damascus with army defectors who had refused to shoot at a pro-democracy protest.

Six months into a popular uprising, Assad is under pressure from street protests and from Arab foreign ministers who told Syria Sunday to work to end bloodshed "before it is too late."

The Arab League decided to send its secretary-general to Damascus to push for reforms, while the president of neighboring Turkey said he had lost confidence in Syria.

Residents of Khan Sheikhoun, on the main road 245 km (155 miles) north of Damascus, said two people had been killed in an army assault on their town. Two local activists, Tareq al-Nisr and Musaab Taha, were wounded, another activist said.

"It was an assassination attempt. The security police and shabbiha (militiamen) are beginning to use targeted assassinations and arresting people in larger numbers," said the activist, who gave his name as Abu Wael.

In Damascus, dozens of soldiers defected and fled into al-Ghouta, an area of farmland, after pro-Assad forces fired at a large crowd of demonstrators near the suburb of Harasta to prevent them from marching on the center, residents said.

"The army has been firing heavy machineguns throughout the night at al-Ghouta and they were being met with response from smaller rifles," a resident of Harasta told Reuters by phone.

A statement published on the Internet by the Free Officers, a group that says it represents defectors, said "large defections" occurred in Harasta and security forces and shabbiha loyal to Assad were chasing the defectors.

It was the first reported defection around the capital, where Assad's core forces are based.

Syrian authorities have repeatedly denied any army defections have been taking place. They have expelled independent media since the uprising against Assad, from Syria's minority Alawite sect, erupted in March.

Activists have been reporting increasing defections among the rank-and-file army, mostly drawn from Syria's Sunni majority but dominated by an Alawite officer core effectively under the command of Assad's brother Maher.

In the town of Hirak in the southern Hauran Plain, a crowd shouted, "Oppressor, your reign will finish. Prepare yourself for execution," according to footage distributed by residents.

In the eastern town of Albu Kamal on the border with Iraq's Sunni heartland, which has been besieged by tanks for weeks after large protests, an activist said security police snipers killed two protesters when they fired at a crowd who tried to demonstrate at the main square after nightly Ramadan prayers.

"A crowd streamed out from the grand mosque when they were met by bullets fired by security police snipers. Three protesters were also wounded," he said.

The United Nations says 2,200 people have been killed since Assad sent in tanks and troops to crush months of street demonstrations calling for an end to his family's 41-year rule.

Syrian authorities have blamed armed "terrorist groups" for the bloodshed across Syria and say 500 police and army have been killed.

The latest demonstrations in Damascus were triggered in part by an attack Saturday by Assad's forces on a popular cleric, Osama al-Rifai. He was treated with several stitches to his head after they stormed al-Rifai mosque complex in the Kfar Sousa district of the capital, home to the secret police headquarters, to prevent a protest from coming out of the mosque.

Protesters have been buoyed by increasing international condemnation of Assad's crackdown. President Abdullah Gul of Turkey, a former ally, said the situation had reached a point where changes would be too little too late, Turkish state-run news agency Anatolian reported.

Gul told Anatolian in an interview: "We are really very sad. Incidents are said to be 'finished' and then another 17 people are dead. How many will it be today? Clearly we have reached a point where anything would be too little too late. We have lost our confidence."

In Cairo, the Arab League said in a statement after an extraordinary meeting that it was concerned "over the dangerous developments on the Syrian arena that had caused thousands of casualties" and "stresses the importance of ending bloodshed and to resort to reason before it is too late."

It was the first official Arab League meeting on Syria since the start of the uprising, inspired by revolutions in Tunisia and Egypt that sparked unrest across the Middle East and North Africa. The foreign ministers said Syria's stability was crucial for the Arab world and the whole region.

Assad's closest ally, Shi'ite Iran, with which he has been strengthening ties to the disquiet of Syria's Sunni majority, has said Damascus must listen to the "legitimate demands" of its people.

Iran warned NATO Sunday against any temptation to intervene in Syria, saying that rather than the defeating a regime it would be bogged down in a "quagmire" similar to Iraq or Afghanistan.