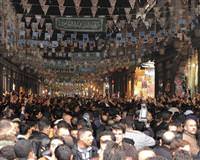 Government forces shot dead at least seven demonstrators in southern Syria on Tuesday when crowds demanding the removal of President Bashar al-Assad left mosques after prayers marking the end of the Muslim fasting month of Ramadan, residents and activists said.

The seven, including a 13-year-old boy, were killed when forces fired at demonstrators streaming out of mosques in the towns of al-Hara and Inkhil in southern Deraa province after 'Eid' prayers to mark the feast celebrating the end of Ramadan.

On Monday, an armoured Syrian force surrounded a town north of Homs after the defection of tens of soldiers from the area, activists and residents said, in the latest operation to counter dissent within the military during a five month uprising.

At least 40 light tanks and armoured vehicles, and 20 buses full of troops and Military Intelligence, deployed at 5:30 a.m. at the highway entrance of Rastan, 20 km (12 miles)north of the city of Homs and began firing heavy machineguns at the town.

Rastan is traditionally a reservoir of recruits for the mostly Sunni rank-and-file army dominated by officers from Syria's Alawite minority sect, the same sect as President Bashar al-Assad.