Russia's Putin revs up vote campaign astride a bike 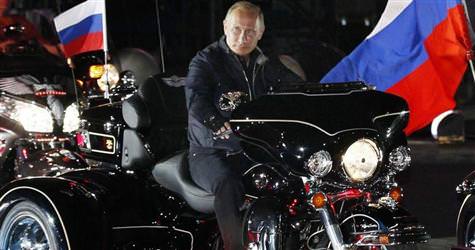 Russian Prime Minister Vladimir Putin kicked off an election campaign on Monday revving up his three-wheeled Harley Davidson at the head of a bikers motorcade -- the latest in a series of macho stunts that have punctuated his political career.

Black-clad Putin, 58, called the bikers his "brothers" as he joined a festival aboard a Soviet-era warship in the Black Sea port of Novorossiysk, held to mark the city's liberation during World War Two.

"I want to talk to you, brothers. It is cool that you do not forget the heroes of the past," said Putin. "Boys, girls you are great. Not only are you having fun while riding your bikes but you are also combining it with patriotic deeds."

Putin's United Russia party is hoping to secure a two-thirds majority in December's vote for the Duma lower house of parliament -- a margin that would give it the power to change the constitution.

Campaigning began in earnest after President Dmitry Medvedev signed a decree on Monday setting the date for the poll as December 4.

The December election will also set the scene for a presidential poll in March 2012. Putin and Medvedev have not said who will run.

Putin's testosterone-fueled appearances have earned him the nickname "alpha-dog" in U.S. diplomatic cables. In the past he has been pictured sparring with his judo coach, flying a fighter jet and hunting Siberian tigers.

In Novorossiysk on Monday, he rode along as the hard-rock anthem of the "Night Wolves" biker club blared in the background. Club leader Alexander Zaldostanov, nicknamed "Surgeon," is one of Putin's friends.

During the event, Putin was flanked by veterans of World War Two and the conflicts in former Yugoslavia.