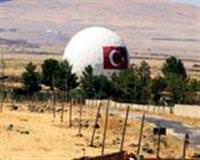 Iran's defence minister on Tuesday criticised the pending deployment of a NATO early-warning radar system in Turkey, saying Tehran would not tolerate any aggression against its national interests.

The Turkish and U.S. governments said on Friday the radar system will help spot missile threats coming from outside Europe, including potentially from Iran. The system, provided by the United States, is to become operational later this year.

"The West claims the radar system (in Turkey) is to confront Iranian missiles but they should be aware that we will not tolerate any aggression against our national interests," Defence Minister Ahmad Vahidi was quoted by state TV as saying.

But Turkey, increasingly critical of Iranian ally Syria, has split with Iran recently over Syrian President Bashar al-Assad's bloody crackdown on popular unrest in his country.

Vahidi warned Turkey over the radar system, which Ankara says is not against any specific country. "We regard the presence of America and the West as a troublesome and harmful presence for the Islamic countries," Vahidi said.

Turkey has also sought stronger ties with Russia, which has said a NATO missile defence system could threaten its security if it develops the capability to down Russian nuclear missiles.

However, Russia's NATO envoy said a radar system in Turkey would not threaten Russian security.

The United States and its allies are at odds with Iran over its nuclear programme, saying Tehran is trying covertly to develop atomic bombs. Iran denies this, saying it is enriching uranium only for electricity or other civilian purposes.

Israel and the United States have not ruled out military strikes on Iran if diplomatic means fail to stop it obtaining nuclear weapons. Iran refuses to recognise Israel.
Iranian officials have previously announced that the country's domestically-produced missiles can reach Israel and U.S. bases in the Gulf. Iran says its response to any military attack will be "painful."

Moscow unilaterally suspended the delivery of S-300 missiles to Iran after the United States and Israel expressed concern that the Islamic Republic could use the anti-aircraft system to shield its nuclear facilities.