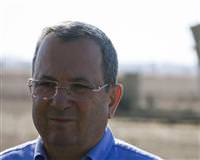 
Ankara downgraded ties and vowed to boost naval patrols in the Mediterranean after Israel refused to apologize for killing nine Turks aboard a ship that tried to breach its blockade on the Palestinian enclave last year.

Noting that an inquiry commissioned by U.N. Secretary-General Ban Ki-moon had vindicated the blockade, Barak predicted that wider Middle East upheaval would help bring Israel back together with its Muslim ex-ally.

"Ultimately this wave will pass. We recognize reality. They recognize reality," Barak told Israel Radio. "We are the two countries that are most important to the West in the region ... I am certain that we can overcome these [disagreements]."

"The main thing is not to get confused, not to get into a tailspin. Turkey is not about to become an enemy of Israel and we have no cause to waste invective and energy over this."

Asked whether Israel might yet say sorry for its May 31, 2010 seizure of the Turkish activist ship Mavi Marmara, Barak said: "Look, it's spilled milk. It's not important right now."

In addition to an apology, NATO-member Turkey has demanded that Israel end the Gaza blockade. Israel says the closure is needed to keep arms from reaching Palestinian guerrillas by sea.