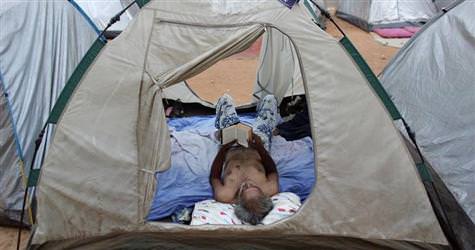 Organisers of Israel's biggest rally for economic reform said on Sunday they will begin to fold their tents but social change will move on, driven by weeks of protests that brought hundreds of thousands to the streets.

Prime Minister Benjamin Netanyahu, responding to the latest massive demonstrations by a disgruntled middle class in the country's business centre, Tel Aviv, and other cities, stuck fast to his pledge to implement change but not at all costs.

"People now know their strength, it is something addictive and it cannot be stopped," Yonatan Levy, one of the leader of Israel's new social movement, said on Israel Radio.

Police put the number of demonstrators at around 300,000. Rallies on that scale in Israel, with a population of 7.7 million, have been held over issues of war and peace.

The grassroots protest movement has swollen since July from a cluster of student tent-squatters into a countrywide mobilisation of Israel's middle class.

Netanyahu's governing coalition faces no immediate threat, but the protests have underscored the potential electoral impact of hundreds of thousands of voters rallying under a banner of "social justice".

Protest leaders said they will pause demonstrations in the coming weeks until a government-appointed reform committee submits its conclusions. They said a tent city in Jerusalem would be dismantled later on Sunday with others to follow.

A large banner at Saturday's Tel Aviv rally -- held in a square surrounded by some of the city's most upscale shops -- called for the state budget to be breached to boost social welfare.

In remarks to his cabinet the morning afterwards, Netanyahu gave no sign he would yield on his refusal to go beyond the budget framework. He said he had broken new ground by appointing the reform committee, which is due to submit recommendations in two weeks' time.

"I intend to act swiftly in the wake of its findings and to maintain the proper balance between social sensitivity and fiscal responsibility," Netanyahu said.

"This balance preserves the economy, the country, its citizens and social welfare in Israel," he added, saying he wanted to avoid the type of economic troubles currently afflicting a number of European countries.

The right-wing Israeli leader, a champion of free market reforms, has cautioned he would not be able to satisfy all the protesters' demands, ranging from tax cuts, to expansion of free education and bigger government housing budgets.

Though the turnout on Saturday was lower than the ambitious one million some had hoped for, commentators said the movement had made its mark on Israel by catapulting the economy onto a political agenda long dominated by security concerns and diplomacy.

Some commentators predicted a gradual shift in the national debate to a more divisive question: whether state subsidies for large ultra-Orthodox Jewish families, religious institutions and settlements in the occupied West Bank should be redirected towards funding better services for the general public.

Protest leaders, who have called for national unity, have largely steered clear of that issue. But Nahum Barnea, a popular political columnist, said anger over those politically-charged allocations helped fuel the demonstrations.

"Young middle-class people saw what has been happening in Israeli society over the past several years, and they are sick of it," Barnea wrote in the Yedioth Ahronoth newspaper.

"They saw ... the flow of money into parasitic sectors, the distorted priorities of preferring building in settlements to fixing what is wrong in society and the rapid enrichment of those close to the seat of power," he said.

Although Israel enjoys a low 5.5 unemployment rate and a growing economy, business cartels and wage disparities have kept many from feeling the benefit. Many protesters come from the middle class that bears a heavy tax burden and sustains the conscript military.

Since it began, the popular movement has upstaged a diplomatic face-off with the Palestinians for U.N. recognition of statehood and has posed the greatest challenge yet to Netanyahu's government, which includes religious and pro-settler parties.