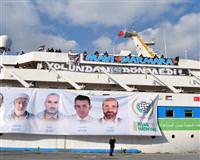 Israel's naval blockade of the Gaza Strip violates international law, a panel of human rights experts reporting to a UN body said on Tuesday, disputing a conclusion reached by a separate UN probe into Israel's raid on a Gaza-bound aid ship.

The so-called Palmer Report on the Israeli raid of May 2010 that killed nine Turkish activists said earlier this month that Israel had used unreasonable force in last year's raid, but its naval blockade of the Hamas-ruled strip was legal.

The four-year blockade deprived 1.6 million Palestinians living in the enclave of fundamental rights, they said.

"In pronouncing itself on the legality of the naval blockade, the Palmer Report does not recognise the naval blockade as an integral part of Israel's closure policy towards Gaza which has a disproportionate impact on the human rights of civilians," they said in a joint statement.

Israel says its Gaza blockade is a precaution against arms reaching Hamas and other Palestinian fighters by sea.

The four-man panel headed by former New Zealand prime minister Geoffrey Palmer found Israel had used unreasonable force in dealing with what it called "organised and violent resistance from a group of passengers".

Turkey has downgraded ties with Israel over the incident.

Richard Falk, UN special rapporteur on human rights in the occupied Palestinian territories and one of the five experts who issued Tuesday's statement, said the Palmer report's conclusions were influenced by a desire to salve Turkish-Israeli ties.

"The Palmer Report was aimed at political reconciliation between Israel and Turkey. It is unfortunate that in the report politics should trump the law," he said in the statement.

About one-third of Gaza's arable land and 85 per cent of its fishing waters are totally or partially inaccessible due to Israeli military measures, said Olivier De Schutter, UN special rapporteur on the right to food, another of the five.

At least two-thirds of Gazan households lack secure access to food, he said. "People are forced to make unacceptable trade-offs, often having to choose between food or medicine or water for their families."

The other three experts were the UN special rapporteurs on physical and mental health; extreme poverty and human rights; and access to water and sanitation.