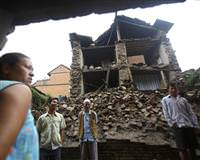 Rain and landslides hampered the search for survivors of a 6.8 magnitude earthquake that killed at least 39 people in isolated Himalayan regions stretching across India, Nepal and Tibet, police and media said on Monday.

Thick cloud kept helicopters from flying over the affected areas and authorities say the number of casualties could rise as rescue teams have not been able to reach remote areas.

Eighteen casualties were confirmed in the northeastern state of Sikkim, the epicenter of Sunday night's quake, with more deaths reported in neighboring Nepal and Tibet.

"My feeling is the death toll and number of injured is going to increase further."

Sikkim, the country's most sparsely populated state located in the Himalayas surrounded by Nepal, Bhutan and Tibet, is prone to landslides, with the number of high-rise buildings rising in its mountain towns due to India's economic boom.

At least two died in Bihar state, south of Sikkim, while five died in the Indian state of West Bengal.

"People are still panicky," Pawan Thapa, a resident of Sikkim's capital Gangtok, told Reuters by phone. "We spent the whole night outside our homes."

He added that shops, businesses and offices were closed in state capital Gangtok and neighboring areas.

"Even if the number of casualties is low, there is likely to be a huge need for humanitarian assistance for affected civilians whose homes have been destroyed and who need food and shelter. The U.N. is taking this very seriously," said the U.N. official, who declined to be identified.

Outside India, at least seven people died in neighboring Nepal, three of them killed when a wall on the perimeter of the British embassy in Kathmandu collapsed onto a car and a motorcycle. Seven were also reported dead in China's restive Tibet region, China's state-run news agency Xinhua said.

Landslides and heavy rain were slowing the arrival by road of at least 400 rescue workers and doctors trying to reach the worst affected area after landing at the nearest airport almost 100 km away.

Army officers and border police stationed near the epicenter of the quake in Sikkim, which has a large military deployment near the Chinese border, and rescued at least 200 villagers.

Their patrols sent in radio reports of more casualties as they spread out on foot to isolated mountain villages.

Many towns in Sikkim experienced power cuts, while thousands are being sheltered by the government. At least 100 people were injured in Sikkim alone, while hundreds of tourists, mainly Indian, were stranded on the main road out of the state to West Bengal in the south.

The quake was felt all the way to New Delhi in India as well as to Bangladesh, shaking buildings.

Several earthquakes have hit north and east India this year, but none have caused major damage or injuries.

In 2001, a devastating earthquake in the western state of Gujarat killed at least 19,700 people and caused damage in neighboring Pakistan.