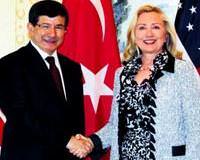 The United States urged Turkey on Monday not to do anything to worsen its relationship with Israel, officials said on Monday, seeking to prevent relations between two allies from deteriorating further.

One official offered no details but may have been alluding to the possibility of the Turkish navy escorting aid flotillas to the Gaza Strip ruled by the Hamas Islamist group, which the United States and Israel regard as a terrorist organization.


Israel's May 2010 raid on a Gaza-bound aid flotilla killed nine Turkish citizens and the idea of future Turkish naval escorts raise the possibility of a military confrontation between two major U.S. allies in the Middle East.


U.S. Secretary of State Hillary Clinton delivered the message in a nearly one-hour meeting with Turkish Foreign Minister Ahmet Davutoğlu that also touched on the Cyprus dispute, the Israeli-Palestinian conflict and Syria's brutal crackdown on protests against the four-decade Assad government.
Israel's refusal to apologize for the flotilla incident has angered Turkey, an ally of the United States through the North Atlantic Treaty Organization, and a growing economic power.
"She encouraged Turkey to keep the door open," a senior official who spoke on condition of anonymity said after Clinton and Davutoğlu met ahead of the U.N. General Assembly session that opens this week.
"We want to see them repair their relationship, so she encouraged them to avoid any steps that would close that door and, on the contrary, to actively seek ways that they can repair (their) important relationship with Israel," he added.
"The secretary made clear that this is not a time when we need more tension, more volatility in the region," a second official said, apparently referring to Israel's deteriorating ties with Egypt and Jordan and tensions with the Palestinians.
WATCHED WITH DISMAY
The United States has watched with dismay as Turkish-Israeli ties began to unravel in late 2008, after Israel outraged Turkey by launching an offensive against the Gaza Strip, ruled by Hamas.
After the release of a U.N. report on the flotilla, which aimed to break Israel's naval blockade of Gaza, Turkey expelled Israel's envoy, froze military cooperation and said the Turkish navy could escort future aid flotillas.
Turkish Prime Minister Tayyip Erdoğan has kept up a stream of harsh rhetoric on Israel, using a tour of Arab states last week to support a Palestinian bid for statehood at the United Nations and dismissing Israel as a spoiled client of the West.
The two countries previously worked closely together on military cooperation and intelligence sharing, as both had sought reliable partners in a volatile neighborhood.
Their relationship is sure to come up when President Barack Obama and Erdoğan meet in New York this week for talks expected to cover Turkey's neighbors Syria and Iran as well as wider issues.


In a gentle rebuff, an official said Clinton repeated the U.S. position the internationally recognized Greek Cypriot government had the right to search for gas in the Mediterranean and that this should not undermine talks to resolve the dispute over the divided island of Cyprus.

Cyprus was split in 1974 triggered by a brief Greek-inspired coup. Current peace talks are the latest in a series of on-and-off consultations to relink the sides under a federal model.
Turkey, the only country to recognize the breakaway state of northern Cyprus, has said any reserves belong to both communities. The Greek Cypriot government has said it will block Turkey's talks to join the European Union as long as Ankara challenges its rights to such energy reserves.