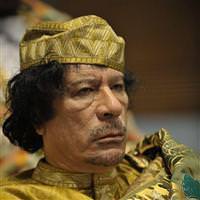 Libya's deposed leader Muammar Gaddafi said the system of rule he set up was based on the people's will and could not be removed, speaking in a recorded message broadcast on Tuesday.

In the audio message carried by Syrian-based Arrai television, he also said NATO's planes would not be able to continue their operations in Libya.

"The political system in Libya is a system based on the power of the people ... and it is impossible that this system be removed," he said. "The bombs of NATO planes will not last."