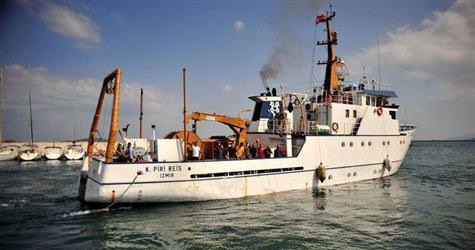 The Piri Reis ship began exploring for gas off the coast of Cyprus on Monday, the Turkish Cypriot government said, an announcement that escalates a confrontation between Cyprus, Israel and Turkey over huge Mediterranean gas reserves.

The Greek Cypriot government said last week it had started drilling for gas at a site south of the island, infuriating Turkey which supports a separate Turkish Cypriot government on the north of the island.
Israel has also been drilling in nearby waters.
The battle over claims to what may be the biggest natural gas discovery in the world for the last decade has widened the split between Turkish and Greek-speaking Cypriots, and harmed Turkey's relations with Israel, already strained over a deadly Israeli raid on a Gaza-bound aid flotilla last year.
Cyprus has been divided since 1974 into a Greek side recognised internationally and a Turkish region recognised as a separate state by Turkey. Peace talks between the sides are due to resume on Tuesday.
Turkey insists no gas should be pumped until the island's fate is resolved. Turkish Prime Minister Tayyip Erdoğan last week called the Israeli and Cypriot gas drilling "madness".
Tension rose after Cyprus announced last week that drilling had started offshore, close to a gas field in Israeli waters. Texas-based Noble Energy is carrying out the drilling in the Cypriot block and also drills for Israel.
Turkey has said it will drill on behalf of Turkish Cyprus if the Greek Cypriots do not abandon their plans. The Greek Cypriot government says it has a sovereign right to explore for energy.
On Monday, Turkish Cypriot Prime Minister Irsen Küçük said a Turkish exploration vessel had started exploration. He did not give the exact location, but said the Piri Reis ship was working in "the AR/KKTC/G authorized zone". KKTC is the Turkish abbreviation for the Turkish Republic of Northern Cyprus
GREECE CALLS FOR CALM
Greek Prime Minister George Papandreou spoke to Erdogan on Monday and called for "self-restraint and calm" in the gas dispute, Greek government spokesman Ilias Mosialos said.
"Unilateral actions that create problems in the region should be avoided", Mosialos quoted Papandreou as saying.
An official from Erdoğan's office said Erdoğan had told Papandreou it would be better if gas exploration and extraction took place after a peace settlement had been reached on the island, and said unilateral actions could harm negotiations.
The two discussed holding a high-level meeting on Cyprus, possibly between end-October and mid-November. They had been due to meet at last week's U.N. general assembly in New York but Papandreou stayed in Athens because of the debt crisis.
Greece, whose relations with fellow NATO member Turkey have warmed in the past decade after a long history of enmity, is not directly involved in the gas exploration but is a close ally of Greek Cyprus.