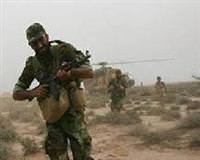 Iran has forced the terrorist group PJAK from its territory, state television quoted a Revolutionary Guards commander as saying on Thursday.

Deputy chief of the Revolutionary Guards Abdollah Araqi also said 180 PJAK terrorists were killed and more than 300 wounded in a summer offensive along the northwestern border with Iraq.
PJAK (Party of Free Life of Kurdistan) is an offshoot of the PKK terrorist organization, whose bases in northern Iraq were bombed by Turkish warplanes earlier this month.
"We have cleared all of our territory of PJAK terrorists. Although some of our forces were martyred in clashes with these terrorists ... last week the group surrendered and retreated," Araqi was quoted as saying.
Earlier this month, the Revolutionary Guards rejected a ceasefire declared by PJAK as "meaningless" as long as the group's forces remained on the borders of the Islamic Republic. Iranian media have previously reported that PJAK had launched ambushes and sabotaged gas pipelines in the area.
The surge in violence in Kurdish-populated areas of Turkey, Iraq and Iran follows the killing of more than 40 Turkish security personnel by the PKK in July. Turkey's armed forces have said between 145 to 160 terrorists were killed in air and artillery strikes on PKK bases in northern Iraq in August.