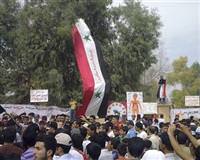 Supporters of Syrian President Bashar al-Assad hurled rocks and tomatoes at U.S. ambassador Robert Ford's convoy as he visited an opposition figure in Damascus on Thursday in an attack the U.S. said was "wholly unjustified."

Ford and his party were not injured, the U.S. State Department said, but several embassy vehicles were damaged and the ambassador had to lock himself in an office to await help from Syrian security.

Syria, which has been irked by Ford's meetings with opposition figures, accused Washington of inciting violence and meddling in its affairs. Washington demanded that Syria take steps to protect U.S. diplomats.

"We condemn this unwarranted attack in the strongest possible terms. Ambassador (Robert) Ford and his aides were conducting normal embassy business and this attempt to intimidate our diplomats through violence is wholly unjustified," U.S. Secretary of State Hillary Clinton said.

"We immediately raised this incident with the Syrian government and we are demanding that they take every possible step to protect our diplomats according to their obligations under international law."

State Department spokesman Mark Toner said Ford had been in touch with senior department officials. "He is calm. He is resolute. And he is determined to continue to carry out his duties," he said.

Assad's crackdown on six months of pro-democracy protests has envenomed relations with the United States, which has imposed fresh sanctions and rallied world pressure on Syria.

President Barack Obama took office in 2009 pledging to engage in dialogue with Damascus and named Ford as ambassador.

The diplomats were visiting Hassan Abdelazim, a centrist politician who has demanded an end to Assad's crackdown as a condition for any opposition dialogue with the president.
"Two embassy cars were damaged," said a witness, who asked not to be identified, adding that the demonstrators were chanting "Abu Hafez (father of Hafez)," a nickname for Assad.

Ford was already inside the building when about 200 Assad supporters attacked the embassy vehicles with large rocks and street signs with concrete bases. Embassy staff inside the vehicles were not harmed. Police later extracted the convoy.

The Syrian government said that once they were alerted to the confrontation, authorities "took all necessary procedures to protect the ambassador and his team and secure their return to their place of work."

The State Department said that when Ford and his aides arrived at the building housing Abdelazim's office, they were met by a "mob" of pro-government demonstrators who followed them to the office, shouting slogans. When Ford's group reached the office they shut themselves inside and called for assistance from Syrian security.

No one in the American part was injured, the State Department said, but several embassy vehicles were damaged.

Soon after the incident, the Syrian Foreign Ministry issued a statement accusing the United States of "encouraging armed groups to practice violence against the Syrian Arab Army."

The attack was the second on U.S. diplomats since protests erupted in March. Assad supporters assaulted the U.S. embassy in July after Ford visited the flashpoint city of Hama, winning cheers from protesters who later faced a tank-led crackdown.

Ford, who has angered Syria's rulers by cultivating links with the grassroots opposition, has also visited a protest hot spot in the southern province of Deraa, ignoring a new ban on Western diplomats travelling outside the Damascus area.
Two weeks ago he and several other Western envoys attended the wake of a prominent activist.

Ford arrived in Damascus in January, filling a diplomatic vacuum since Washington withdrew his predecessor in 2005. Obama had hoped the gesture would help convince Assad to reconsider his alliance with Iran and with Islamist militant groups.

Western powers are pushing for a United Nations resolution condemning Syria, although opposition from Russia and China means this is unlikely to impose immediate sanctions.

"The U.N. Security Council cannot stay quiet any longer facing the daily crimes being committed against the population by the Syrian regime," French Foreign Ministry spokesman Bernard Valero said. "We want to warn the Syrian regime. We want it stop the terror and repression."

Haitham al-Maleh, a Syrian opposition leader who is visiting France and meeting French government officials, said that during a stop in Geneva this week he had urged the U.N. Human Rights Council to prepare a file on Assad and his aides for a possible prosecution by the International Criminal Court.

The United Nations says Assad's crackdown has killed at least 2,700 Syrians, including more than 100 children. Syrian authorities blame the violence on "armed terrorist gangs," which they say have killed 700 members of the security forces.

Maleh put the death toll at 5,250, saying 5,000 people had disappeared, more than 100,000 had been arrested and 20,000 had fled to Turkey, Lebanon and Jordan. He called for U.N. military protection zones for civilians to be set up on the borders.

France's human rights ambassador Francois Zimeray said his country was committed to bringing those responsible for abuses in Syria to justice. "It may take years, but the perpetrators will be judged," he told reporters.
ARMED RESISTANCE

Armed resistance has emerged in Syria after months of mostly peaceful protests, with battles in the last few days in the town of Rastan, 180 km (112 miles) north of Damascus.

Army deserters backed by armed villagers were holding out against tank fire, but Rastan was running short of supplies, activists and residents said.

"The more they (Assad loyalists) take casualties, the more they fire at civilians," said one resident, who gave his name as Sami, adding that defenders were holding up the tanks with boobytraps and rocket-propelled grenades.

"The wounded are not being taken to hospital because it is at the front line. Makeshift clinics in homes are running out of medical supplies," he added.

The Syrian Revolution General Commission, an umbrella for several activist groups, said the army assault had killed 41 people in Rastan in the last 72 hours, but that the figure was an estimate, with communications cut with the besieged town