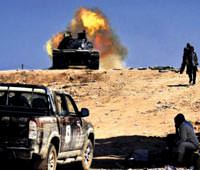 Libyan interim government forces have pledged to mount a final decisive attack on Muammar Gaddafi's hometown and one of his former lieutenants says he believes the deposed leader is ready to fight to the end.

"I think Gaddafi ... has not left the country. I strongly believe, based on my knowledge of him, that he is fighting with his weapons and alongside his men," Gaddafi's former Prime Minister Al-Baghdadi Ali al-Mahmoudi, who is in prison in Tunisia, said in comments passed to Reuters by his lawyer.

"He will not give up and he will not lay down his weapons until the end," Mahmoudi said on Tuesday.

Gaddafi and several of his sons are still at large more than seven weeks after rebel fighters stormed the capital and ended his 42-year rule. His supporters hold Sirte and the town of Bani Walid, south of Tripoli.

Government forces who had for three weeks been pinned down by artillery and rocket fire on the eastern edges of Sirte have since advanced several kilometers (miles) into the city, capturing the southern district of Bouhadi.

Bullet-holed cars carrying terrified, ill and hungry civilians crawled out of Sirte. Aid agencies say they are concerned about civilians who are trapped inside the city by the fighting and running out of food, water, fuel and medicine.

Commanders of forces loyal to the ruling National Transitional Council (NTC) are talking of a "final" push to take the town. Backed by NATO warplanes, they have been bombarding pro-Gaddafi positions inside Sirte.

U.S. Defense Secretary Leon Panetta said he expected NATO aerial operations over Libya to continue while fighting goes on, but that the alliance would discuss the issue this week.

"As long as there's fighting that's continuing in Libya, I suspect that the NATO mission would continue," Panetta told reporters in Cairo.

NATO renewed the mission in September for 90 days but agreed to review conditions every 30 days to see whether operations could be ended.

A senior U.S. defense official, speaking on condition of anonymity, said the "general consensus is that we're not there yet because of the continued fighting and resistance of pro-Gaddafi forces."

Panetta said the fighting in Sirte and the mystery over Gaddafi's whereabouts left a question mark over how to end NATO's air operation and allow the interim administration to move on to other issues.

Gaddafi's former prime minister, who is in prison while the authorities in neighboring Tunisia consider a request from the NTC for his extradition, said he would be ready to cooperate with Libya's new rulers if they dropped that request.

Concerns about the humanitarian crisis in Sirte have focused on the Ibn Sina hospital. Medical workers who fled Sirte said patients were dying on the operating table because there was no oxygen and no fuel for the hospital's generators.

"It's a disaster," a doctor who gave her name as Nada told Reuters as she fled the city on Tuesday. "They are hitting the hospital. Two kids have died there. There is random shooting at the hospital from both sides."

On the east of the city on Tuesday, NTC fighters said they were trying to clear a corridor to the hospital but that they were being hampered by pro-Gaddafi snipers.

Gaddafi's former prime minister, who is not on the list of former Libyan officials wanted by the International Criminal Court, distanced himself from the repression of the old regime.

"I tell you one thing: I was hated by Gaddafi's entourage," al-Mahmoudi said. "I am convinced that I have done nothing bad to the Libyans," he said. "My role was to ensure food supplies for the Libyan people, particularly during the crisis."

"The French know very well that this was the role I played ... I had no military role."

Gaddafi's spokesman, and some civilians leaving Sirte, have blamed NATO bombing and NTC shelling for killing civilians and destroying buildings in the town.

NATO and the NTC say Gaddafi loyalists have been executing suspected NTC sympathizers and forcing others to fight.

A Red Cross convoy delivered oxygen and other urgently needed medical supplies to the hospital on Monday after an earlier attempt was aborted because of heavy fighting.

Ali Durgham, leaving the city with several relatives, told Reuters his father had been killed and his uncle gravely wounded by a shell as they walked to a mosque on Monday.

"My father died in my arms," he said, weeping. "I buried him yesterday."

Medical staff outside Sirte said they had been told the corridors of Ibn Sina were full of patients and that only pro-Gaddafi fighters or members of his tribe were being treated.

A military spokesman for the interim government has said that Gaddafi's son Mutassim is hiding in the hospital.