Sarah Palin decides not to run for president in 2012 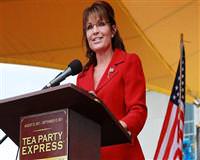 Sarah Palin said on Wednesday that she will not seek the Republican U.S. presidential nomination in 2012, ending months of speculation and leaving the Republican field largely settled.

Palin had left the door open to a run but gave little sign of joining the race to challenge Democratic President Barack Obama. She made it official in a letter to supporters and in an interview with conservative talk radio host Mark Levin.

"After much prayer and serious consideration, I have decided that I will not be seeking the 2012 GOP nomination for president of the United States," she said in the letter.

Her decision leaves Republican voters to choose from a field that is led by former Massachusetts governor Mitt Romney, Texas Governor Rick Perry, and businessman Herman Cain, and includes a host of others.

In her letter, Palin cited family considerations as playing a major factor in her decision. She has felt the U.S. news media has gone too far in covering her family, such as the drama involving her daughter Bristol's tempestuous relationship with the father of her child, Levi Johnston.

She made clear she would turn her attention toward recreating a role she carved out for herself in the 2010 congressional elections, helping elect Tea Party conservatives to Congress, state governorships and the White House.

"I believe that I can be more effective and I can be more aggressive in this mission in a supportive role of getting the right people elected," she told Levin.

Palin's star had faded since her opening days as McCain's vice presidential nominee in 2008 when she burst onto the scene as a relative unknown and quickly became a conservative star and promoted herself as a "mama grizzly."

She has been polling far behind the main challengers for the Republican nomination and most Palin-watchers had long since concluded that she was not going to run based on a series of equivocating statements.

There seemed to be no temptation by Palin to run for president as a third-party candidate.

"I would assume that a third party would just guarantee Obama's re-election and that's the last thing our republic can afford. So the consideration is not there for a third party, no," she told Levin.

Costas Panagopoulos, a political science professor at Fordham University, said he expects Palin to be a factor in the 2012 elections.

"She has a very dedicated following and a knack for staying relevant in politics, even when she herself is not a candidate," he said.